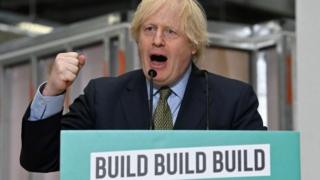 The prime minister has set out how £5bn worth of infrastructure projects would be spent in order for the UK to “bounce back better”. Boris Johnson compared his plan with former US President Franklin Delano Roosevelt’s New Deal.

Reality Check has taken a closer look at some of the announcements:

Boris Johnson said: “It sounds like a New Deal… because that is what the times demand.”

In the early 1930s, the New Deal programme increased the state’s role in the economy and was designed to help the US recover from the Great Depression.

Comparisons between government programmes in different countries, 90 years apart, are very difficult to make – our economies have changed out of all recognition.

Also, there are strong arguments that it was Roosevelt’s structural reforms involving things like banking and social security that brought about the recovery.

Nonetheless, there have been a few valiant attempts at trying to get New Deal spending into some sort of modern context.

Remember that the New Deal ran over several years, with spending each year between about 5% and 7% of the total output of the economy (GDP) each year.

Boris Johnson’s £5bn would be less than a quarter of one percent of GDP if it were spent in a single year (which is unlikely).

Before the speech, it was announced £1.5bn would be made available for hospital maintenance and construction, the removal of mental health dormitories and increasing A&E capacity.

It would be part of the pot of money known as the capital budget. This spending is the money we use to build new hospitals or fix existing ones. It is also spent on new equipment, such as MRI machines.

This spending was cut between 2010-11 – when the Conservatives entered power – and 2017-18 by about 7% in England, according to the Health Foundation. This was because the NHS was focusing its resources on day-to-day running of the health service, such as staff pay. However, recent announcements have seen spending refocus on capital projects.

In the Spring Budget 2020, the Department of Health and Social Care’s capital budget increased by £1.1bn, taking the annual budget to £8.2bn.

The department has said that the £1.5bn announced on Tuesday is all “new” money – that is on top of the earlier £1.1bn.

It should also be seen against an existing backlog of £6.5bn already needed to fix problems in NHS buildings.

The government has pledged £100m this year for 29 road-network projects to “get Britain moving”, including:

But this is a relatively small amount of money for a large number of projects.

And it is not new.

It has been allocated from the money set out in the Spring Budget for infrastructure investment.

The prime minister said “we will build fantastic new homes on brownfield sites” and promised the “most radical reforms” of the planning system since World War Two.

The UK’s planning system was effectively established in 1947, two years after the end of the war, with the Town and Country Planning Act.

There has been criticism in recent years of the amount of time it takes planning permission to be granted for certain projects.

But it has also been pointed out by homeless charities among others that many developers secure planning permission and then don’t immediately build. Shelter said 280,000 homes were given planning permission between 2011 and 2016 but were never built.

The government has also said that it would spend £12bn to build houses over the next eight years, something which had been announced previously.

This is also the allocation of some of the infrastructure spending announced in the Spring Budget.

And there have been no details of which 50 schools will be given the money.

But this turned out to be just bringing forward some of the £1.5bn over five years promised in the Conservative manifesto for further education.

And on Tuesday, Mr Johnson made no mention of this £200m, refencing the whole £1.5bn instead.

But Conservative-led governments over the past decade have consistently fallen short of targets for tree-planting set out in their election manifestos.

Tree-planting is a devolved issue in the UK, but England’s tree-planting record is particularly poor compared with other European countries.

Government funding and support saw about 3.6 million trees newly planted in England in the two years from 2017 to 2019, covering an area of about 2,300 hectares.

That figure does not include trees planted to replace others that have been cut down.

As for Mr Johnson’s overall comparisons with Roosevelt’s New Deal in the 1930s, then the US president established a Civilian Conservation Corps of hundreds of thousands of unemployed young men (women were not allowed to join).

More than three billion trees were planted across the country by the end of the decade – an achievement that outstrips anything the UK government is now promising to do.

Image copyright Getty Images People fleeing abusive relationships will be able to apply to stay in the UK even if their eligibility is linked to the relative they fled from. The government is proposing changes to immigration rules for people applying to the EU settlement scheme. People’s circumstances will be recognised alongside the time they […]

Aviation and gyms ‘ignored’ by government

Image copyright Getty Images UK airlines have said they are being “ignored” by the government after not being included in a fresh wave of economic stimulus to counter the effects of coronavirus. Industry body Airlines UK warned of further job losses after tens of thousands of job cuts. Gyms also said they were ignored, and […]

Image copyright Getty Images People in “high-contact” professions, such as taxi drivers, sales assistants, pharmacists and cleaners are to be able to get tested for coronavirus even if they don’t have symptoms. The NHS said employers including Addison Lee and Boots will take part. Care workers and some NHS staff already have access to “asymptomatic” […]