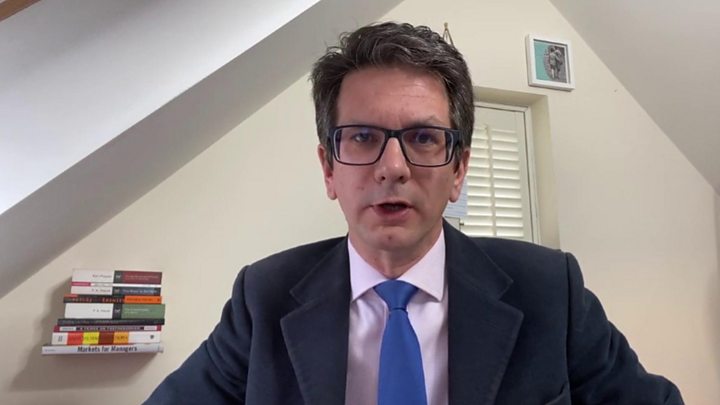 Mr Cummings is facing new allegations, with The Observer and Sunday Mirror reporting he made a second trip to the North East after returning to London.

No 10 says this is “false” and Grant Shapps says Mr Cummings will not quit.

Steve Baker is among the backbench MPs to question his position, saying he “should go and we should move on”.

Mr Cummings and the government had said he acted “reasonably and legally” in response to the original claims that he drove 260 miles from London to County Durham while his wife had coronavirus symptoms.

Labour has called for an urgent inquiry into the allegations, while government ministers rallied around Mr Cummings on Saturday and defended his conduct.

Matt Hancock and Michael Gove were among those to back Mr Cummings for self-isolating at a property adjacent to other family members in case he and his wife needed help with childcare.

Mr Cummings told reporters outside his home on Saturday that he would not be resigning and had done the “right thing”.

The two newspapers have now reported witnesses saw Mr Cummings in Barnard Castle, more than 25 miles from Durham, on 12 April.

On 14 April, he was seen in London. According to a witness, he was spotted again near Durham in Houghall Woods on 19 April.

Mr Cummings is yet to publicly respond to the new claims, but the Sunday Telegraph reports he told Downing Street he left Durham on 13 April, and that the claim he made a second trip from London was “totally false”.

Transport Secretary Grant Shapps told the BBC’s Andrew Marr that the claims of a second trip was “untrue”.

When asked if Mr Cummings was going to resign, Mr Shapps replied: “No.”

But there are growing calls from backbench Tory MPs for Mr Cummings to consider his position.

Ex-chairman of the European Research Group (ERG) Steve Baker told the BBC: “The country can’t afford this nonsense, this pantomime, Dominic should go and we should move on and deal with things that matter in people’s lives.”

Tory Sir Roger Gale said there “cannot be one law for the prime minister’s staff and another for everyone else”.

While as a father and as a grandfather I fully appreciate Mr Cummings’ desire to protect his child. There cannot be one law for the Prime Minister’s staff and another for everyone else. He has sent out completely the wrong message and his position is no longer tenable.

Conservative MP Caroline Nokes tweeted: “There cannot be one rule for most of us and wriggle room for others.”

Colleague Simon Hoare has called for Mr Cummings to “consider his position”, Tory MP Damian Collins has said the government “would be better without him” and MP Craig Whittaker has said Mr Cummings’ position “is untenable”.

In response to the fresh claims, Downing Street said: “Yesterday the Mirror and Guardian wrote inaccurate stories about Mr Cummings.

“Today they are writing more inaccurate stories including claims that Mr Cummings returned to Durham after returning to work in Downing Street on 14 April.

“We will not waste our time answering a stream of false allegations about Mr Cummings from campaigning newspapers.”

Downing Street has also denied that police spoke with family members of Mr Cummings “about this matter”.

After an apparently co-ordinated show of support from some of the most senior Conservatives yesterday, today the first cracks may be starting to show.

Steve Baker has become the first Tory MP to break ranks and call for Dominic Cummings to go.

As one of Parliament’s most prominent Brexiteers, his intervention is significant.

The tone of his criticism even more so – accusing Mr Cummings of regarding “accountability with contempt”.

His view is that Boris Johnson is expending too much political capital on trying to save his adviser.

The next few hours will see how many more follow suit.

If there’s enough backbench unrest, it will leave Boris Johnson with an unappealing choice to make: oust a highly-valued adviser or risk upsetting the party to keep him.

Other opposition parties have also renewed their calls for the prime minister’s adviser to go.

The SNP’s Ian Blackford said Mr Cummings “has to leave office”, while acting Liberal Democrat leader Sir Ed Davey told BBC Radio 5 Live: “If Dominic Cummings has not been sacked by tomorrow, I think the prime minister’s judgement is in serious doubt.”

Government advice had been for people to stay at home during the first weeks of lockdown. Self-isolation at home continues to be advised for those with coronavirus symptoms.

It comes as the government announced 282 more people had died with coronavirus since Friday, across all settings, bringing the total to 36,675.

Image copyright PA Media Ex-Tory Leader William Hague says lockdown is an “economic catastrophe” and is calling for the two-metre distancing rule to be scrapped. Writing in the Telegraph, Lord Hague said lockdown was increasing inequality, social tension and debt. The hospitality industry, and some MPs and scientists, have called for the 2m (6ft) rule […]

Image copyright Getty Images Image caption Prime Ministers Boris Johnson and Shinzo Abe at the 2019 G7 Summit The UK and Japan are set to begin talks on Tuesday aimed at reaching agreement on a post-Brexit trade deal. The negotiations come as London and Tokyo work towards replacing the agreement Britain currently has with Japan […]

Coronavirus: Council funds to be shared ‘in fairest way possible’

Image copyright PA Media The latest tranche of emergency coronavirus funding for councils in England is to be allocated “in the fairest way possible”, ministers say. County councils will get 65% of the £1.6bn pot and district councils 35%, based on population size and local authorities’ specific needs. None of the money will be ring-fenced, […]