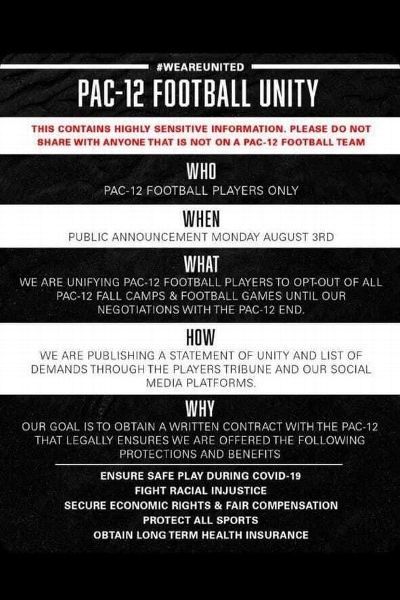 A group of Pac-12 football players from multiple schools penned a letter in The Players’ Tribune threatening to opt-out of fall camp and game participation unless their demands for fair treatment, safety regulations and concerns over racial justice for college athletes are met by the conference.

According to a source, one of the bigger issues the group wants to address is racial injustice, which is outlined in the letter.

The student-athletes are asking the conference to form a permanent civic-engagement task force to address social injustice issues, as well as an annual Pac-12 Black College Athlete Summit with at least three athletes from every school in the conference.

In addition, the letter says the group wants the conference to direct 2% of conference revenue to support financial aid for low-income Black students, community initiatives and development programs for college athletes on campus.

The athletes within the group leading this charge also say they are being asked to play college sports in a pandemic without transparency and guarantees for their safety, and without the ability to secure representation while being asked to sign documents that could serve as liability waivers.

Among the demands listed in the letter, the group starts by asking for safety protections amidst the COVID-19 pandemic. Allowing an option for the student-athletes to opt out of play during the pandemic without losing eligibility or a spot on the team, prohibiting any COVID-19 agreements that waive liability and player-approved health and safety standards enforced by a third party selected by players to address COVID-19.

“Because we should not be stuck with sports-related medical expenses, including COVID-19 related expenses, #WeAreUnited,” the letter reads.

The group is asking the conference to distribute 50 percent of each sport’s total conference revenue evenly among athletes in their respective sports, six-year athletic scholarships, the ability to transfer one time with impunity.

The demands were released on Sunday, and as of Saturday, the Pac-12 said in a statement it had yet to hear from the group.

“Neither the Conference nor our university athletics departments have been contacted by this group regarding these topics,” a Pac-12 statement said. “We support our student-athletes using their voice and have regular communications with our student-athletes at many different levels on a range of topics. As we have clearly stated with respect to our fall competition plans, we are, and always will be, directed by medical experts, with the health, safety and well being of our student athletes, coaches and staff always the first priority. We have made it clear that any student athlete who chooses not to return to competition for health or safety reasons will have their scholarship protected.”

With the 2019-20 NHL season on pause due to the coronavirus pandemic (here’s the latest update on where things stand), we’ve started the NHL Viewers Club, highlighting some of the most rewatchable games from this season — such as when EBUG David Ayres beat the Maple Leafs — along with some cool hockey documentaries on […]

Packers have $385M in reserve fund to help cover expenses, if needed

GREEN BAY, Wis. — The Packers have $385 million in their reserve fund, and depending on what happens with the 2020 NFL season, they might have to dip into it. The Packers, without a single deep-pockets owner, long ago established the savings account specifically to ensure the team could cover expenses for one year in […]

Liverpool made one of the easiest title runs in the history of the Premier League, clinching the title with seven of 38 matches remaining. They finished the season with 99 points in league play, second-most ever after Manchester City, who finished 18 points behind the Reds in second place this year. Does that level of […]