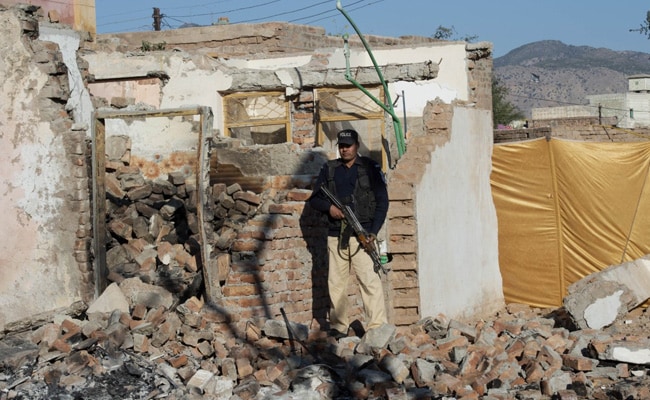 The Khyber Pakhtunkhwa provincial government in Pakistan has dismissed 12 police officials following an enquiry report that found them guilty of “negligence” in protecting a Hindu temple in the province, which was torched by a mob led by members of a radical Islamist party.

The government also forfeited one-year service of 33 police officials in connection with the incident.

The temple in Terri village in Khyber Pakhtunkhwa’s Karak district was attacked on December 30 by the mob after members of the Hindu community received permission from local authorities to renovate its decades-old building. The mob demolished the newly constructed work alongside the old structure.

Mr Shah conducted the probe against 73 police officials and recommended to dismiss 12 of them from service on charges of negligence and irresponsibility in the discharge of their official duties.

“Keeping in view of the available record and facts on file, perusal of enquiry papers and the recommendations of the Enquiry Officers, they are found guilty of the charges. They show cowardice, negligence, and irresponsibility in the discharge of their official obligations. They failed to protect the Hindu Temple which caused disrepute for the Police department in the eyes of the general public,” the report said.

The report said that the mob, under the supervision of Maulana Shareef, assaulted the Hindu Temple in Terri, wherein the mob burnt the said temple and damaged it without any interruption as a result of which a complaint under various sections was filed in the Terri police station.

Maulana Shareef, who is in judicial custody, is said to have incited the crowd.

“This is highly quite adverse on their part and shows negligence, carelessness and irresponsibility on the part of delinquent hands,” the report said.

Meanwhile, a delegation of MP’s belonging to the minority communities on Tuesday visited the vandalised Hindu temple.

The Supreme Court has ordered the Evacuee Property Trust Board (EPTB) to start reconstruction of the damaged temple and instructed authorities to recover the money for the restoration work from the attackers whose act has caused “international embarrassment” to Pakistan.

On January 1, India lodged a strong protest with Pakistan over the vandalisation of the temple, saying it expects Pakistan to carry out an investigation into the incident and has asked for sharing of the probe report with it.

According to sources, the Ministry of External Affairs conveyed its serious concerns to the Pakistan High Commission here over the repeated instances of similar incidents and atrocities against the members of the minority community.

“It was also impressed upon the government of Pakistan that this was not the first time the temple was destroyed. This has been going on since 1997. We also asked for the investigation report to be shared with the ministry,” a source said.

According to official estimates, 75 lakh Hindus live in Pakistan. However, according to the community, over 90 lakh Hindus are living in the country.

The majority of Pakistan’s Hindu population is settled in Sindh province where they share culture, traditions and language with Muslim residents. They often complain of harassment by the extremists.

Police detained at least 23 partygoers, the ministry said. (Representational) At least 13 people were crushed to death or asphyxiated as playgoers tried to flee a Lima nightclub raided by police because it was open in violation of restrictions imposed to fight the coronavirus pandemic, officials said. At least six were injured, including three police […]

Iran passed a law on Wednesday to immediately begin enriching uranium to a level closer to weapons grade and to suspend the access of international inspectors to its nuclear facilities if sanctions are not lifted by early February, shortly after President-elect Joseph R. Biden Jr. takes office. The law was the clearest fallout yet from […]