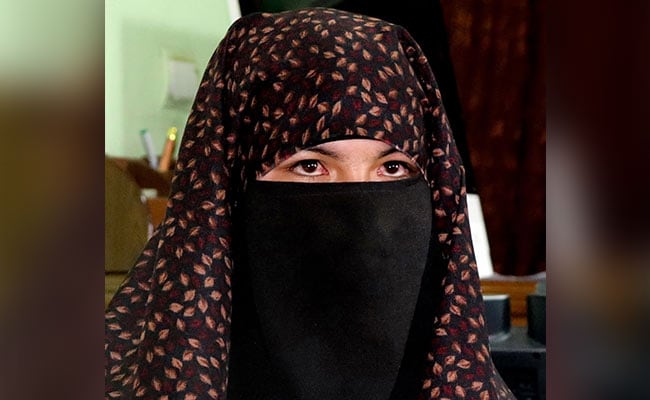 Qamar Gul regrets she was unable to say goodbye to her mother and father.

An Afghan girl who shot dead two Taliban fighters after they gunned down her parents said she was ready to confront any other insurgents who might try to attack her.

Qamar Gul, 15, killed the militants when they stormed her home last week in a remote village in the central province of Ghor.

“I no longer fear them and I’m ready to fight them again,” Gul told AFP by telephone from a relative’s home, where she was being watched by guards.

A photo of Gul posing with a gun has circulated online, with many praising her actions and calling for her safe passage out of the country.

It was about midnight when the Taliban arrived, Gul said, recounting the events of that night.

She was asleep in her room with her 12-year-old brother when she heard the sound of men pushing at the door of their house.

“My mother ran to stop them but by then they had already broken the door,” Gul said.

“They took my father and mother outside and shot them several times. I was terrified”.

But moments later, “anger took over”.

“I picked up the gun we had at home, went to the door and shot them,” said Gul, who was taught by her father how to fire an AK-47 assault rifle.

Her brother stepped in when one of the insurgents, who appeared to be the group’s leader, tried to return fire.

“My brother took the gun from me and hit (shot) him. The fighter ran away injured, only to return later,” Gul said,

By then, several villagers and pro-government militiamen had arrived at the house. The Taliban eventually fled following a lengthy firefight.

The New York Times reported Wednesday that the killings at Gul’s home also involved a family feud — and that one of the attackers was Gul’s own husband.

The paper, quoting Gul’s relatives and officials, said he was seeking her “forcible return” after a falling-out with her family.

Officials told AFP the Taliban had come to kill Gul’s father, who was the village chief, because he supported the government.

The insurgents regularly kill villagers they suspect of being informers for the government or security forces, with Taywara district, where Gul’s remote village is located, the scene of near-daily clashes between government forces and the Taliban.

Gul regrets she was unable to say goodbye to her mother and father.

“After I killed the two Taliban, I went to talk to my parents, but they were not breathing,” she said. “I feel sad, I could not talk to them one last time.”

Hundreds of people on social media are demanding the government protect her, with some calling for her to be sent outside of Afghanistan.

“I demand that the president help transfer her to a safe place as her and her family’s security is at risk,” prominent women’s rights activist and former lawmaker Fawzia Koofi wrote on Facebook.

Munera Yousufzada, a defence ministry official, said Gul’s “brave act” was a message to the Taliban from Afghan women.

“The Taliban must realise and know that today’s women are different than the women during their rule,” she said on Twitter.

“If you really want to protect her, then send her abroad. If she comes to Kabul for even two days… she will be killed,” Zoya Amini, a resident of Kabul, wrote on Facebook.

A Taliban spokesman has confirmed an operation took place in the area of the attack, but denied any of the group’s fighters had been killed by a woman.

WASHINGTON: The United States reported more than 55,000 new Covid-19 cases on Thursday, the largest daily increase any country has ever reported, according to a Reuters tally. A surge in coronavirus cases across the United States over the past week has put President Donald Trump‘s handling of the crisis under the microscope and led several […]

Thai Dissidents Are Disappearing, and Families Are Fighting for Answers