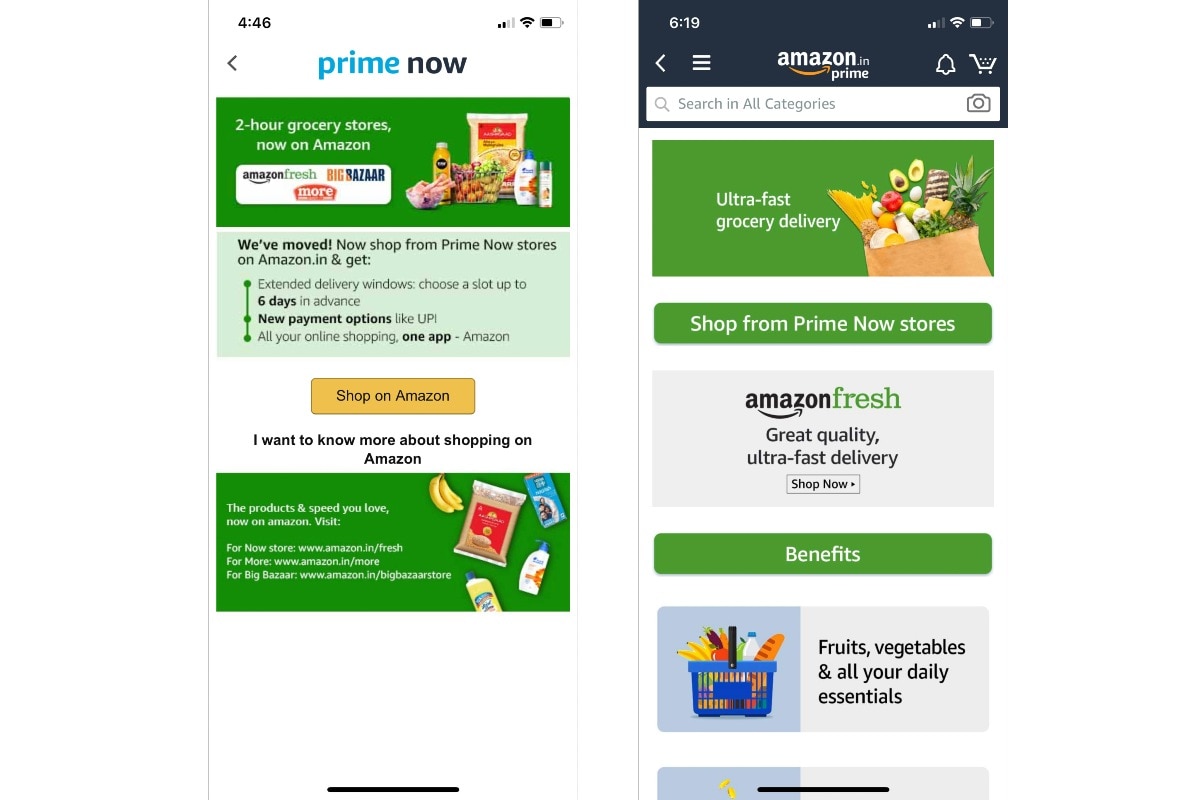 Amazon Pantry has been expanded to over 300 cities across India. The service that is aimed to help customers order grocery and everyday essentials was initially launched in Hyderabad back in September 2016, and it reached 110 cities in May last year. In addition to the Amazon Pantry expansion, Amazon has also shut down the Prime Now app that was originally launched as Amazon Now back in 2016 and rebranded as Prime Now in May 2018. The US e-commerce giant has integrated the two-hour delivery experience that was the USP of its Prime Now within the official Amazon app and available under the Amazon Fresh branding.

Amazon claims that it is offering a selection of 3,000 products from over 200 brands through the service that debuted in the country in 2016. The company brought the service to hundreds of towns including Bharatpur in Rajasthan, Bilaspur in Chhattisgarh, Shivpuri in Madhya Pradesh, Fatehabad in Haryana, and Mirzapur in Uttar Pradesh in the last few months.

Orders made through the Pantry service are delivered in one or two days, Amazon said in a statement. Customers in select cities, namely Bengaluru, Chennai, Delhi, Hyderabad, Kolkata, Mumbai, and Pune, can also choose from convenient time slots to schedule their Pantry deliveries.

Aside from the Pantry expansion, Amazon has finally shutdown the Prime Now app and integrated its two-hour delivery experience within the native Amazon app available for both Android and iOS users. The shutdown, which Gadgets 360 reported in April, is aimed to bring Amazon Fresh to the limelight.

The Prime Now app is still available for download through Apple App Store and Google Play. But nonetheless, it is of no use now as you’ll be welcomed with a splash screen that has a link to the Amazon app and details the features of the Amazon Fresh service.

Initially, Amazon Fresh was available in select pin codes of Bengaluru, though it has been expanded to six cities now. The service offers delivery of fruits, vegetables, and other daily essentials in as early as two hours.

You can access Amazon Fresh directly from the Amazon app or via the Amazon.in website. It lets you make orders up to six days in advance and supports a range of payment options including UPI. Furthermore, there are Prime Now stores on Amazon Fresh to fulfil your orders directly from your nearby facility.

Amazon has also added Big Bazaar and More as the two options to get doorstep delivery of your grocery orders. However, both hypermarket stores are limited to select pin codes at the present stage.

In 2020, will WhatsApp get the killer feature that every Indian is waiting for? We discussed this on Orbital, our weekly technology podcast, which you can subscribe to via Apple Podcasts or RSS, download the episode, or just hit the play button below.

Affiliate links may be automatically generated – see our ethics statement for details.

The Next Apple AirPods Refresh Will Not Arrive before 2021

Image for Representation. Apple was all set to launch the new AirPods this year but has delayed its release owing to COVID-19 pandemic. News18.com Last Updated: May 9, 2020, 2:54 PM IST The Coronavirus pandemic has hit the smartphone industry like never before, forcing big players to revamp their plans as well as […]

China aims to complete GPS system that rivals US

A Beidou navigation satellite was successfully launched by a long March 3b carrier rocket from the Xichang Satellite Launch Center in southwest China’s Sichuan province on November 5, 2019. Costfoto | Barcroft Media | Getty Images China is gearing up to send the last satellite to space, a move that will complete a global navigation network […]