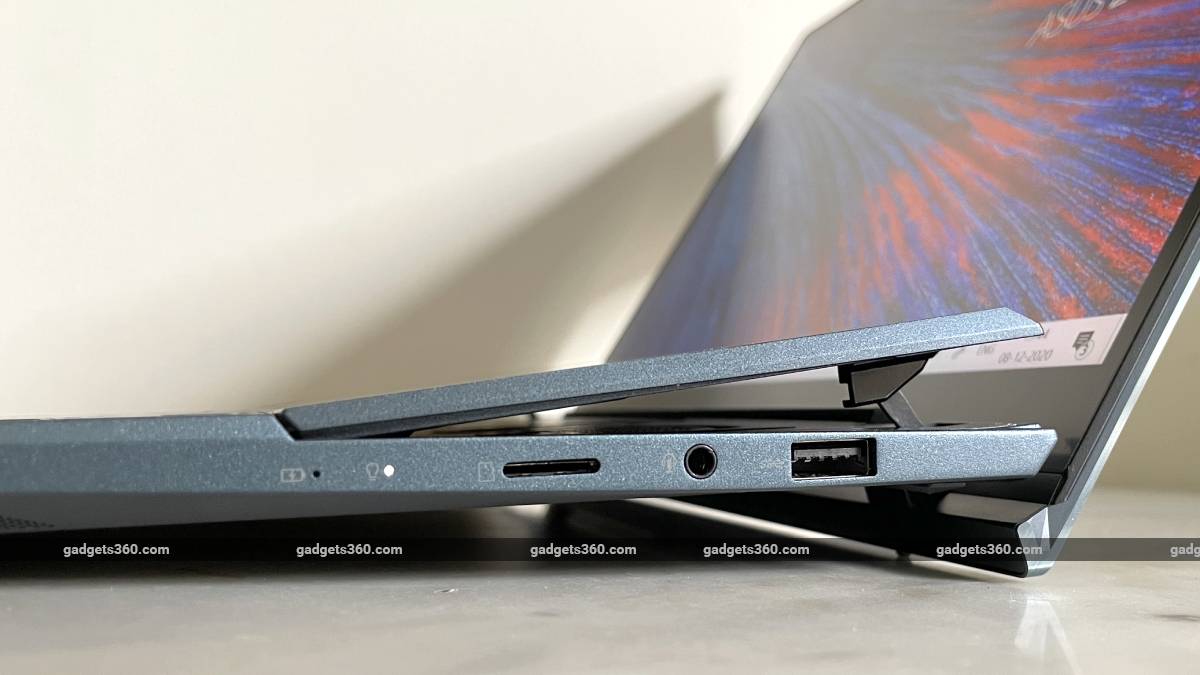 Asus has updated its dual-screen ZenBook Duo and ZenBook Duo Pro laptops at CES 2021, and even though the show is happening virtually this year, Gadgets 360 was able to spend a little time with a demo unit. The ZenBook Duo series now has updated internals and an auto-tilt mechanism that raises their secondary screens to a more comfortable viewing angle. The original ZenBook Duo series was first unveiled at Computex 2019, following which Asus showed off its ROG Zephyrus Duo based on the same rough design, but with a raised secondary screen to help with airflow and ergonomics. That little modification has now made its way back into the ZenBook lineup, and it does make a pretty big difference.

The giant secondary screen, which Asus calls ScreenPad+, stretches out across the width of the ZenBook Duo’s lower half. It matches the horizontal resolution of the main display so that you can treat it just like a second monitor that’s aligned vertically rather than horizontally. With the original ZenBook Duo, the ScreenPad+ was flat and in line with the keyboard, which made it a little hard to use. When I reviewed that laptop, I found myself hunching and leaning forward quite often. The new mechanism solves that problem to an extent.

Asus combines its ‘Ergolift’ hinge action, which raises the entire lower deck, with this new auto-lift mechanism, so that the ScreenPad+ angles itself automatically when you open the lid. The angle goes up to 7 degrees and is not adjustable beyond that. Thankfully, the raised panel doesn’t obscure the bottom of the main screen at any angle. My demo unit came with a stylus, and the ScreenPad+ did not flex or bend when pressed down on.

The mechanism feels solid enough but it looks as though it could get damaged if you try closing the laptop’s lid with something like a pencil accidentally wedged under the ScreenPad+. There shouldn’t be much danger of pinching a finger but it would be a good idea to handle this laptop gently. I’m a little wary of dust and lint since the gap is relatively narrow and looks like it will be hard to clean, but Asus does include a protective sleeve.

Both the main display and the ScreenPad+ have matte finishes which reduce reflections to some extent. The resolutions are 1920×1080 and 1920×515 respectively. As for the internal hardware, we have an 11th Gen Intel ‘Tiger Lake‘ CPU with integrated Intel Xe graphics and an optional discrete Nvidia GeForce MX450 GPU. My demo unit has 32GB of RAM and a 1TB NVMe SSD, but exact specifications will vary.

The ‘Ergolift’ hinge raises the entire lower deck, while the new mechanism also tilts the ScreenPad+

The ZenBook Duo UX482E has an Intel Evo sticker, which means it has been designed to meet a set of requirements in terms of weight, performance, and battery life. It’s 16.9mm thick and has relatively narrow screen borders, with space for a webcam in the usual spot. Asus claims 17 hours of battery life, and this laptop can be charged over USB Type-C.

There are two Type-C Thunderbolt ports and a full-sized HDMI port on the left, plus one Type-A port, 3.5mm audio socket, and microSD card slot on the right. The keyboard layout is improved, compared to the first generation, and we now have a more sensible arrow cluster plus the Shift keys are in the right place. There’s still a vertical trackpad which will not suit left-handed users. In terms of comfort, the keyboard is right at the lower edge of the body which could become uncomfortable over time.

Asus has improved its software, and you can easily move programs from one screen to the other. You can set up batches to launch a number of programs and have them tile automatically on the two screens. Both are touch-capable so the ScreenPad+ can function as a control surface in some software.

All in all, Asus seems to have refined the design of its original ZenBook Duo series, and the new model should be more practical for everyday use. Information about pricing and availability in India isn’t known yet. Stay tuned to Gadgets 360 for news of when it launches in India.

What will be the most exciting tech launch of 2021? We discussed this on Orbital, our weekly technology podcast, which you can subscribe to via Apple Podcasts, Google Podcasts, or RSS, download the episode, or just hit the play button below.

WD’s latest round of redesigns has spread throughout its portable storage lineup, replacing the bold, bright, sharp design-led identity with rounded edges, muted colours, and simpler plastic bodies. Whimsy has given way to practicality, which you might or might not be in favour of. The latest reimagined storage device is the WD My Passport SSD […]

Vivo S7 is expected to come with dual selfie cameras and a triple camera setup on the back featuring a 64-megapixel shooter, as an alleged render of the upcoming 5G phone has been leaked. The image showcases the device’s front and back design, along with its gradient rear panel. This new development comes nearly a […]