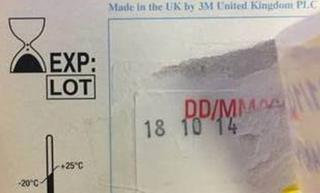 A council has asked for government reassurance that a supply of personal protective equipment for staff on the front line against Covid-19 is safe, despite being six years out of date.

Birmingham City Council said it received a delivery in April of about 4,000 masks with 2014 use-by dates.

The authority claims a further supply was sent to it with plain stickers covering the 2014 date with a 2019 one.

A minister overseeing PPE would respond to the council, the government said.

It has also emerged more of the same FFP3 masks have been sent out in the past two weeks, bringing to 16,000 the total number of masks the council has in stock but said it could not use.

In a letter to housing minister Chris Pincher, who has been co-ordinating the government’s efforts to supply local authorities with PPE, council leader Ian Ward said it was first made aware of a potential issue with the masks on 22 April.

The Labour-controlled authority had since then been asking “on a daily basis” for written confirmation of their safety from the Ministry of Housing, Communities and Local Government and the Department of Health and Social Care, he added.

Mr Ward said it was “incredibly concerning” the government had failed to do so, despite the “severe implications” of it not providing assurances – specifically that the council had only “a few” days’ supply of useable FFP3 masks left to distribute.

He wrote: “Our primary objective is to protect the health and safety of those that may need PPE. We will not jeopardise their safety by releasing potentially ineffectual, date-expired stock.”

His letter said if the equipment had been tested “a clear, documented audit trail should be readily available”.

Mr Ward said: “It is quite frankly outrageous that we are having to chase the government on this issue.

“Those workers, that are putting themselves in harm’s way to help the city get through this crisis, should not be put at even greater risk with the supply of potentially defective PPE.

“Please can we receive the ministry’s urgent written assurance that our current stock of date-expired PPE is safe to use?”

The Ministry of Housing, Communities and Local Government told the BBC Mr Pincher would be “responding to the letter in due course”.

A Department of Health and Social Care spokesperson said: “All deliveries of PPE are checked to ensure the equipment meets the safety and quality standards to protect our front-line workers.”

Image copyright Getty Images Image caption A body representing care homes says it may have been “wrong” to prioritise the NHS without protecting elderly residents Care homes felt “completely abandoned” as the coronavirus crisis swept across the UK, the National Care Association has said. Nadra Ahmed, chair of the association, said advice to prioritise the […]

Image copyright Getty Images A joint UK and EU committee focused on how to implement the Northern Ireland part of the Brexit deal held its first meeting on Thursday. The specialised committee is made up of government officials rather than politicians. The UK delegation included senior Stormont official, Andrew McCormick. The Brexit deal, which was […]

Image copyright Justice4Harry19 Image caption Harry Dunn died in hospital after his motorbike was involved in a crash outside RAF Croughton The UK and the US have agreed to amend an “anomaly” that allowed Harry Dunn death suspect Anne Sacoolas to claim diplomatic immunity. A court hearing last month heard the “secret agreement” permitted Ms […]