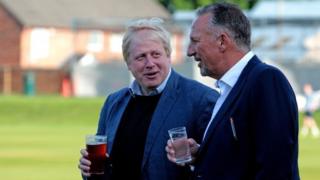 Former England cricket captain Sir Ian Botham is to join the House of Lords, the government has confirmed.

The 64-year-old, a strong supporter of Brexit, is among 32 new peers, who also include former Chancellors Ken Clarke and Philip Hammond.

Former Scottish Conservative leader Ruth Davidson is another who will receive the honour.

Another on the list is Jo Johnson, the prime minister’s Remain-supporting younger brother, who stood down as an MP at the last election.

He resigned as a minister last September, saying he was “torn between family loyalty and the national interest”.

Sir Ian, who played 102 Test matches for England between 1977 and 1992, is an advocate of field sports and a prominent Brexit supporter who was knighted in 2007, in recognition of his services to charity and cricket.

His most famous moment on the field came in 1981 when he inspired a sensational defeat of Australia. After retirement, he became a commentator and started his own wine brand.

He will sit as a crossbench – independent – peer.

Mr Clarke and Mr Hammond were among 21 Conservative MPs who lost the party whip last autumn when they rebelled against Mr Johnson in a bid to prevent a no-deal Brexit.

Ms Davidson quit as Scottish Tory leader last August after eight years in the role, saying the idea of spending long periods away from her young son filled her with “dread”.

Of the Labour MPs honoured, Ms Hoey and Ms Stewart were prominent pro-Brexit campaigners during the 2016 EU referendum.

Philip May, husband of former Prime Minister Theresa May, gets a knighthood for “political service”.

Coronavirus in the UK: The first 100 days

The first confirmed case of coronavirus in the UK was on 31 January. Since then more than 30,000 people have died with the disease and thousands more have needed hospital treatment. Here’s how the crisis has evolved in the 100 days since the first case, and how the government’s policy has shifted as the situation […]

Why are Welsh Assembly Members changing their name?

Image copyright Getty Images Image caption The assembly has been based in the Senedd in Cardiff Bay since 2006 On 6 May, the Welsh Assembly is undergoing a bit of a rebrand. More than 20 years after its foundation, its name has changed and so has the title by which its 60 elected representatives are […]