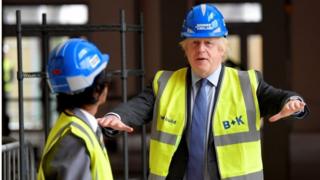 “The cash is there” for long-term investment to help the UK recover from the economic impact of coronavirus, the prime minister has said.

Speaking at a school construction site, Boris Johnson promised “an activist approach to the economy”.

His comments come ahead of the launch of a taskforce to speed up the delivery of infrastructure projects.

The financial impact of the coronavirus on the UK has been heavy with the economy shrinking by 20.4% in April – the largest monthly fall on record.

In an effort to lessen the blow, the government is promising increased infrastructure spending – including funding of £1bn for 50 major school building projects in England.

No 10 said the money would be targeted at school buildings in the worst condition with “substantial investment” going to the North and the Midlands. Full details are expected in the next spending review.

The government is also setting up a new infrastructure delivery taskforce which it says will make sure it builds “the right things, better and faster than before”,

The group – which the government has labelled Project Speed – will be led by the Chancellor Rishi Sunak and will be tasked with delivering projects “more strategically and efficiently” while cutting down completion times.

In addition to schools building projects, the group will also look at proposals to build more hospitals, as promised the the Conservatives in the 2019 election.

Mr Johnson said his government would be “very careful with public finances” but promised an “activist approach”.

He argued investment by the government would increased business confident and drive new growth.

“There is a lot of cash businesses are sitting on, we want to see that cash coming into the economy as well,” he said.

Mr Johnson is expected to set out his spending programme with a speech in Dudley on Tuesday.

Responding to the announcement, Sir Keir urged the government to hold an emergency budget and said it was “staggering” no July budget is planned.

Speaking to Sky News he said: “Any budget in July has to focus on jobs, jobs, jobs – if we go to two or three million people unemployed, that’s going to be so damaging for so many families and for our economy.”

He said the government could use the budget to bring forward infrastructure projects, extend the furlough scheme in certain sectors such as hospitality and set up a “future jobs fund” to help the unemployed back into work.

Between March and May, the number of workers on payrolls fell by more than 600,000, but economists warned the full effect would not be felt until the government’s wage support schemes end.

Under the furlough scheme, the government is paying the wages of the almost nine million people unable to do their job as a result of the coronavirus.

At this stage of the pandemic there will be a lot of focus on the economy and how the government tries to minimise the amount of unemployment.

The government is not shying away from fact this is going to be very difficult recession.

After the last one in 2008, the financial crash, the government really tried to get consumers to spend their way out of it.

The question is – can they do that now given there are some people who are concerned about returning to the shops.

So the government itself will be spending – that’s the plan.

We will be hearing more about changing the planning system but also how you retrain people who do lose their jobs.

There has been a lot of criticism of the government’s handling of what has gone on. They will hope now they can start to shape things.

The UK cannot remain under the control of the European Court of Justice and continue to obey EU laws, the prime minister has said. Boris Johnson said the chances of the UK and remaining EU states reaching a trade deal, for when the transitional period ends on 31 December, were “very good”. He said the […]

Coronavirus: One million miss out on support schemes, MPs say

Image copyright Getty Images More than one million people have fallen through cracks in government schemes designed to support them during the coronavirus crisis, MPs says. The Treasury Select Committee called on ministers to plug gaps in the schemes to fulfil the government’s promise of “doing whatever it takes”. Freelancers and recent employees are among […]

Image copyright Reuters Boris Johnson will hold post-Brexit trade talks with EU Commission President Ursula von der Leyen via video link on Monday next week. The UK and EU have said no major progress has been made towards a deal after four rounds of talks this year. Both sides are due to decide by the […]