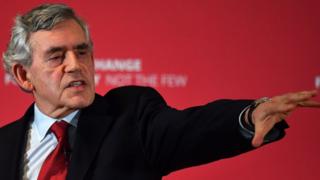 Gordon Brown is to help the Welsh Government lead the country’s recovery from the coronavirus crisis.

The former Labour prime minster, who led the UK between 2007 and 2010, has agreed to be part of an advisory group from outside Wales.

It will advise ministers on how services such as schools, transport and the NHS could operate once the lockdown restrictions have eased.

Counsel General Jeremy Miles has been tasked with leading the recovery.

He will also help plan for Wales’ post-pandemic future.

First Minister Mark Drakeford said it was “the biggest challenge” the devolved government has faced.

Full membership of the advisory group is still being finalised, though other members include Paul Johnson, director of the Institute for Fiscal Studies, and Dr Rebecca Heaton, of the UK Committee on Climate Change.

Mr Miles is expected to give more details about the panel in a press conference on Wednesday.

Mr Brown has previously warned the United Kingdom is at breaking point and could end unless the nations and regions get a real “voice” in decision-making.

Image copyright Getty Images Image caption Cafes and shops closed in Brixton market, south London. Former chancellor Philip Hammond has urged the government to set out its plan to restart the economy. Ministers have been reluctant to discuss a lockdown exit strategy, arguing that it might undermine the message for people to stay at home. […]

Image copyright PA Media Image caption Tom Tugendhat insists he and his colleagues are not “anti-China” Britain needs a better understanding of China’s economic ambitions and global role when the coronavirus crisis ends, a new group of Tory MPs says. The group – headed by Tom Tugendhat, a prominent critic of China’s response to the […]

Coronavirus: Who’s in charge if the PM is ill?

Image copyright Getty Images Foreign Secretary Dominic Raab said he had “all the authority” he needed to make relevant decisions, as he deputised for Boris Johnson while he was in hospital with coronavirus. The prime minister, who has paid tribute to the NHS staff who cared for him, is now recovering at Chequers, and is […]