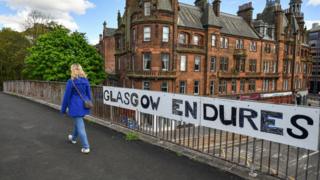 The Scottish government has set out options for lifting the coronavirus lockdown – but has warned that “extreme caution” will have to be exercised.

Strict social distancing restrictions are due to be reviewed on Thursday, but significant changes are unlikely.

Ministers are also seeking ideas from the public about how to ease lockdown.

The new paper says the current restrictions will not change “until it is safe to do so”. It warns that there are still approximately 26,000 infectious people in Scotland, with the number “much too high at present to consider the virus under control”.

It also warns that re-opening schools fully at this point would likely see a new spike in infections which would overwhelm the NHS within two months.

Any changes to lockdown will depend on how the spread of Covid-19 can be suppressed, and ministers have warned that “no significant change” is likely this week.

The paper says there is “some evidence” that the infection rate in Scotland is “slightly above that elsewhere in the UK”, and says “we must continue to proceed with extreme caution”.

It sets out a series of options for gradually lifting restrictions, moving towards a “new normal” which could remain in place for the foreseeable future.

It says people could be allowed to leave their homes more often, while staying within their local area and only mixing with their own household group.

Officials are also considering whether people could be allowed to meet with “a small number of others” outside their own household, first of all in outdoor meetings.

Options for resuming NHS services which were suspended at the outbreak of the pandemic are also being examined, so some procedures and screening services can begin again where safe.

Some workplaces could be allowed to re-open, but the paper warns that “restrictions are likely to remain in place for some business activity for some time to come, especially where safe working is harder to achieve”.

Ms Sturgeon said “particular consideration” was being given to sectors such as construction, retail and manufacturing – but said “where home working is possible we are likely to insist on that for the foreseeable future”.

Ministers are considering “a phased approach to returning pupils to school, when it is safe to do so”.

This could see a list of “priority groups” – including vulnerable pupils, those transitioning from primary to secondary school, and those beginning qualification courses in S3-S6 – resume classes ahead of other pupils.

It would also require “a new approach to schooling”, likely with “a blend of in-school and at-home learning”. This would see pupils attend school part-time in blocks of a few days, with schools being deep-cleaned between groups, and “consistent, high-quality online materials” provided for those learning at home.

Ms Sturgeon said a return to school “might not be possible at all ahead of the summer holidays”, and said “we will not compromise the safety of your children”.

The paper warns that re-opening schools and nurseries too early could cause “a resurgence in the virus” – saying that in the “most likely scenario”, a full re-opening would risk it spreading so fast that “hospital capacity in Scotland would be overwhelmed in less than two months”.

All of the options in the paper are currently under consideration, but Ms Sturgeon stressed that “we are not recommending these options at the moment but offer them as examples of what may come next and the kind of preparations that are under way”.

She said: “We will only make changes to lockdown rules when we believe it is safe to do so, whether that is in reopening schools or businesses or increasing social interaction.

“The most important task for all of us is to get the virus under more control than it is now – I cannot stress enough that we really are at a critical stage.

“That means asking you again to stick rigorously to the current rules, to think about your own compliance, and tightening if if anything, not easing it.

The Scottish government is also appealing for people to contribute to the debate about the best path forward, and has set up a special website for these to be submitted.

A cat interrupted the start of Michael Gove’s reply to a question about the timing of UK-EU trade talks. The Cabinet Office minister told MPs the government believed it was “still entirely possible to conclude negotiations” on the existing timetable. He was asked by Labour MP Hilary Benn about the effect of coronavirus on the […]

Image copyright Reuters The UK now has the highest number of coronavirus deaths in Europe, according to the latest government figures. There have been 29,427 deaths in hospitals, care homes and the wider community across the UK as of 17:00 BST on Monday, an increase of 693. The latest daily total for Italy increased by […]

Labour Party: Jennie Formby to stand down as general secretary

Image copyright Getty Images Image caption Mrs Formby said she had taken on the role to support Jeremy Corbyn and his “inspiring” message Jennie Formby is to stand down as the Labour Party’s most senior official. She said it was the “right time” to make way as general secretary, with the party under new leadership […]