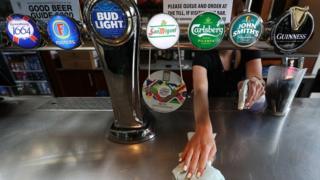 Pubs in England will be allowed to open from 0600 BST on Saturday, No 10 has confirmed.

Downing Street said most of the latest lockdown easing measures will come into force at 00:01 across the country.

But a spokesman said the later opening time for pubs was a “sensible precaution” to avoid midnight parties.

Boris Johnson will urge the public to act “safely and sensibly” at a press conference at 5pm on Friday.

Many businesses – including restaurants, pubs, hairdressers and cinemas – will be allowed to open their doors for the first time since March.

The pub industry said the re-opening was “fantastic” but urged customers to respect staff and changes in practices.

Pub-goers are being encouraged to book tables in advance, while live gigs and standing at the bar will not be allowed.

In Northern Ireland, pubs, bars, hotels and cafes are re-opening on Friday while, in Scotland, hospitality venues with outdoor space will open their doors on Monday. No date has yet been set in Wales.

The 35,000 or so pubs and small bars trading in England have been closed since 20 March.

The majority of them will be opening up again on Saturday, after the prime minister announced a significant relaxation of lockdown measures last week, along with an easing of social distancing rules from 2m to “one metre plus”.

Speaking on LBC Radio, Mr Johnson rejected suggestions that opening pubs on a Saturday was a recipe for trouble, suggesting it would have made little difference to wait until Monday.

“I hope people will do this safely and sensibly…My message is let’s not blow it now folks”.

Dubbed “Super Saturday” in some quarters, there may be nerves in Number 10 as they look to see how people respond to a further easing of lockdown.

Hence, later on Friday, Boris Johnson will urge people to be “responsible”.

Messaging and tone are important in a public health crisis; and Labour’s accused the prime minister of getting his messaging and tone wrong before crowds flocked to Bournemouth beach in June.

Of course, in all directions, there are risks. Yes, there’s the risk of seeing the virus spread but there are also the risks that come with keeping the economy in the deep freeze.

But another reason ministers will want to avoid any scenes of disorder or disarray; no government wants to look like it’s losing control.

At the No 10 briefing later, Mr Johnson will be joined by chief medical officer Chris Whitty and chief scientific adviser Sir Patrick Vallance.

The PM is expected to say the move to ease lockdown is about “supporting the livelihoods of business owners and their employees up and down the country”.

“Just as when we first locked down, we will only succeed in reopening if everyone works together. Because we are not out of the woods yet. The virus is still with us and the spike in Leicester has shown that.”

The PM will also reiterate that the government “will not hesitate in putting on the brakes and re-imposing restrictions” if there is a spike in the virus as a result of the changes.

The rule change comes days after a local lockdown was put in place in Leicester because of a spike in cases.

Businesses and schools in the city will have to remain closed, with residents advised not to travel.

In a joint statement, representatives of the police, fire and ambulance services urged people to drink in moderation, to observe social distancing and reassess their plans if conditions are not safe.

The BBC’s Danny Savage said the emergency services were preparing in the same way they would do for the Friday night before Christmas.

The British Beer and Pubs Association has urged people to respect the hygiene measures in place and to be supportive of landlords and pub staff.

“If we all work together we can ensure that the reopening of pubs and hospitality is a success and an enjoyable experience for everyone,” it said.

However, there are signs that some people will be reluctant to return. Pollsters Ipsos-Mori said 60% of the 1,000 people they spoke to said they would be uncomfortable going to a bar or restaurant.

What about the rest of the UK?

Each UK nation’s lockdown measures differ, including varying rules on the reopening of food and drink outlets.

In Northern Ireland, pubs and restaurants are re-opening on Friday.

In Scotland, beer gardens and outdoor restaurants will be allowed to reopen from 6 July, and indoor areas can be used from 15 July.

The Welsh government has promised talks with the hospitality sector about a “potential phased” reopening, but no dates have yet been given.

Image copyright EPA Boris Johnson will review the UK’s coronavirus lockdown with his cabinet later, after suggesting some rules could be eased from Monday. By law the government must review the restrictions every three weeks, and Thursday marks the latest deadline. The prime minister will address the nation at the weekend to outline plans for […]

Ynys Môn constituency ‘protected’ from cut in number of MPs

Image copyright Virginia Crosbie Image caption Virginia Crosbie: “I know just how important this is to the people of Ynys Môn” The island of Ynys Môn is set to gain “protected status”, meaning it cannot be lost as a UK Parliamentary seat after a review. The amendment was added to a bill to redraw constituencies […]