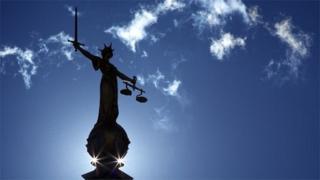 “Mob justice” could increase in England and Wales unless more money is made available to clear the backlog of court cases swollen by coronavirus, the government has been warned.

This could further delay trials, with vigilantes stepping in, he claimed.

The government said a “huge amount of work” was going into keeping the justice system going.

The introduction of social distancing meant jury trials were adjourned on 23 March, but a few are now going ahead in specially altered Crown Courts. Normally there are hundreds happening at any one time.

The backlog in Crown Court cases in England and Wales was 37,434 at the end of last year and the Law Society, which represents solicitors, estimates the number has risen considerably during the coronavirus crisis.

Mr Atkinson, co-chairman of the organisation’s criminal law committee, said that, with most proceedings halted, the lack of legal aid payments to solicitors’ firms – and barristers – meant many risked going out of business.

A shortage of experienced practitioners would further delay trials, he added.

“If people get the idea, the general view, that they will not get satisfaction [from the legal process] then people will take things into their own hands,” Mr Atkinson said.

“Mob justice will be taken up if people feel they can’t get legitimate completion. It will be exploited by people who enjoy doing it.”

David Wilson, professor of criminology at Birmingham City University, said evidence of vigilantism was “anecdotal”, but added that – in communities where police struggle to deal with crime – it was common to “go to the local hard man” for help.

And Kate Williams, senior lecturer in criminology at Wolverhampton University, said it was “highly likely that far more vigilantism exists within the UK than we realise, know about, or is documented”.

She added: “Without doubt, in times of uncertainty such as we are in, particularly when the public feel that they cannot trust the legitimate justice system to deliver, cases of vigilantism will rise.”

In April, the Bar Council, which represents barristers, warned of a potential “breakdown of social order as we emerge from this lockdown”.

About half of its self-employed members who took part in a survey said they could not continue for more than six months on their rate of income during the coronavirus crisis.

The Law Society says there has not been a rise in legal aid payments at the rate of inflation, or above it, for 25 years, and that thousands of solicitors faced going out of business even before coronavirus.

“People’s lives will be completely destroyed if they are found guilty of something they didn’t do,” he said.

The Lord Chief Justice for England and Wales, Lord Burnett of Maldon, told the Commons Justice Committee last week that “with a little bit of luck, by the end of June or thereabouts”, all courts currently closed would reopen.

The National Police Chiefs Council told the BBC it was “working closely with criminal justice partners to ensure, where we can, that swift justice is completed”.

A spokesperson added that, where it was “appropriate”, police would “look to issue an out-of-court disposal”, such as a caution or a penalty notice, for less serious offences.

A Ministry of Justice spokesperson said: “A huge amount of work has gone into keeping the justice system running safely during this pandemic and the suggestion that there could be ‘mob justice’ is inflammatory and unhelpful.

“Jury trials have restarted and a range of support measures have been put in place to help the legal sector – including easier access to hardship payments and pausing debt collection.”

The UK scheme to pay wages of workers on leave because of coronavirus will be extended to October, Chancellor Rishi Sunak said. He said the government backed workers and companies going into the lockdown, and would support them coming out. Mr Sunak rejected suggestions some people might get “addicted” to furlough if it was extended. […]

The prime minister has said “local lockdowns and local whack-a-mole strategies” will be used to deal with coronavirus outbreaks. He was asked about talk of a lockdown after rising cases of the virus in a Leicester suburb. Mr Johnson said: “We are not out of the woods yet”. Source link 60 SHARES Share on Facebook […]

Media playback is unsupported on your device Media captionDominic Cummings: “Who cares about good looks? It’s a question of doing the right thing.’ The prime minister’s chief aide Dominic Cummings is facing fresh allegations that he breached lockdown rules. He and the government had said he acted “reasonably and legally” by driving from London to […]