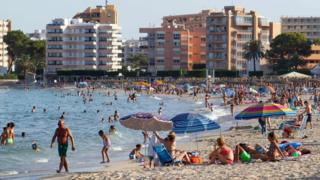 The UK government decision to impose a 14-day quarantine on everyone arriving from Spain was “unjust”, the country’s prime minister has said.

Pedro Sánchez said tourists in most Spanish regions would be safer from coronavirus than in the UK, and he was hoping Britain would rethink its move.

He said talks were ongoing after the UK also advised against all but essential travel to the whole of Spain.

Labour said the government’s handling of the restrictions had been “chaotic”.

But the UK government said it has no plans to change its decision to reintroduce the quarantine measures – with Boris Johnson’s official spokesman warning that “no travel is risk-free during this pandemic”.

Asked about the risk to holidays to other destinations, junior government minister Simon Clarke said the possibility of the rules changing “has to be factored in”.

“By all means go on holiday but understand that there is a chance you may be asked to self-isolate upon your return,” he said.

On Monday, the Foreign Office also extended its travel advice for Spain, now telling people to avoid non-essential journeys to the Canary and Balearic Islands, as well as mainland Spain.

But some travel agents say they are struggling to understand the logic of the UK government’s advice, because the islands have lower coronavirus infection rates.

In an interview with the Telecinco TV network, Mr Sánchez said he was hoping to convince the UK to reverse its decision to remove Spain from the list of countries exempt from quarantine rules.

He said: “We are talking with British authorities to try to get them to reconsider a measure that, in our opinion, is not well adjusted if we consider epidemiological criteria of Spain, particularly in some tourist destinations in our country.”

Spain’s prime minister said the UK had made an “error” by considering the infection rate for the whole country.

He added that “64.5% of the new cases registered are in two territories” and in most of Spain the prevalence of Covid-19 was “very much inferior to the numbers registered in the United Kingdom”.

The rate of infection in Spain is 35.1 cases per 100,000 people, while the UK is at 14.7, according to the latest figures from the European Centre for Disease Prevention and Control.

While the outbreak remains under control in many parts of Spain, certain areas – in particular Catalonia in the north-east and the neighbouring region of Aragón – have seen a huge spike in infections.

Data up to 19 July suggested there were lower rates of infection in the Balearic and Canary Islands than in mainland Spain.

“Why the Canaries – which are further away from Barcelona than Barcelona is the UK – are on the list as well as mainland Spain, I simply don’t understand,” said Labour MP Chris Bryant, who chairs the all-party parliamentary group for Spain.

“And there are many, many regions of Spain which have much lower infection rates than many areas in the UK. I think this has been terribly badly handled.”

Speaking on BBC Breakfast, local government minister Mr Clarke said: “We respectfully disagree with the Spanish government’s position on this.

He responded to criticism that the government should have given more notice, saying ministers received the data on Thursday and Friday “and we acted on Saturday”.

“I don’t think really there could have been a much prompter turn around.”

Travellers returning to the UK from anywhere in Spain must now self-isolate for 14 days at a registered address.

Following a report in the Daily Telegraph that the quarantine for travellers from Spain could be cut to 10 days if they test negative, a No 10 source told the BBC they were “not expecting any move on quarantine days reduction”.

Holiday companies Jet2 and Tui were among those to announce sweeping flight cancellations following the UK announcement.

EasyJet, British Airways, and Ryanair said they would continue to operate full schedules of flights to Spain, though EasyJet said its holidays would be cancelled for the next few weeks.

Among the thousands affected by the change in travel advice was Tom Clasby, who had checked into an airport hotel near Stansted with his fiancé, their two daughters, and other family members, ahead of a holiday to Majorca.

Mr Clasby, 26, was due to depart at 06:55 BST on Tuesday but now faces having to return home to Bury St Edmunds.

“We’re in a situation where we can’t do anything yet and I don’t actually know what to do. The poor little girls have been so excited for this holiday – it’s the second holiday this year we’ve had cancelled,” he told the BBC.

“We are just very disappointed, the girls will be so upset in the morning.”

Also affected was Transport Secretary Grant Shapps, who flew to Spain on Saturday despite knowing a decision on the quarantine policy was due.

People who do not self-isolate can be fined up to £1,000 in England, Wales and Northern Ireland and those returning to Scotland could be fined £480, with fines up to £5,000 for persistent offenders.

After the quarantine rules were first introduced earlier this month, not a single person was fined by police in England and Wales in the first two weeks.

Labour has urged the government to step in to protect jobs in the travel industry, including in aviation.

Shadow transport secretary Jim McMahon said: “The government’s handling of this issue has been nothing short of chaotic. The airline industry and passengers need clarity.”

Meanwhile, the Foreign Office has been criticised by MPs over its “slow” repatriation of Britons abroad at the start of the pandemic.

It comes as a further seven people with coronavirus were reported to have died across all settings in the UK, according to latest government figures – bringing the UK’s total number of deaths to 45,759.

Have your flights been cancelled as a result of the new government advice? Share your experiences by emailing .

Rishi Sunak: The ‘whatever it takes’ chancellor

Image caption Rishi Sunak rolled up his sleeves to encourage the British public to eat out again He’s been dubbed “Dishy Rishi”, “Britain’s economic Jedi” and “Santa Claus in hazmat” in recent months, but most often he is referred to as a “possible future prime minister”. Rishi Sunak’s star has been rising steadily since he […]

The health secretary said he would take opposition criticism over mandatory face masks in English shops “with a pinch of salt”. Matt Hancock said his Labour shadow, Jon Ashworth, used to offer “constructive engagement” but was now turning coronavirus policy in to a “party political football”. Mr Hancock then set out how lockdown measures in […]