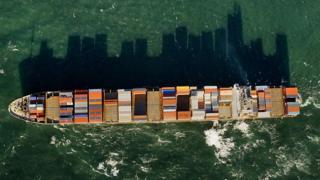 Up to 2,000 UK seafarers are stranded on ships around the world because of coronavirus lockdowns, the industry’s trade body has told the BBC.

The UK Chamber of Shipping wants the UK government to become the first to sign up to a global plan to get crews home.

And the Nautilus International maritime union said seafarers stuck on ships for months were depressed and homesick, “with no end in sight” to their ordeal.

The government said it was working to “ensure” those affected could get home.

Because of port and air route bans for individual travellers, many of the world’s 1.6 million seafarers cannot go home, while relief crews cannot be brought in.

They are working past the end of their contracts and the International Chamber of Shipping estimates 150,000 of them are stuck on board cruisers, transporters, tankers and other vessels.

It has written to Shipping Minister Kelly Tolhurst, urging the UK government to become the first in the world to sign up to the International Maritime Organisation’s new plan to ensure crew changeovers can resume.

The letter, seen by the BBC, also calls for seafarers and offshore workers to be exempt from “any potential air travel quarantine restrictions which may be introduced”. Getting them home is “increasingly taking on a humanitarian dimension”, it adds.

He said: “It’s a confined workplace – not the Hilton Hotel – for three, four or five months. The accommodation is fairly basic and you’re with a small group of people.

“You get into a situation where you think, ‘I’ve got six weeks to go,’ ‘I’ve got four weeks to go,’ and even when this is extended by 24 hours it’s pretty awful. It’s worse when it’s so open-ended.”

Mr Dickinson praised the UK government for classifying seafarers as key workers and allowing them to travel via the country’s ports and airports, unlike those of many other countries.

He added: “My frustration has been with the governments who faff about, locking things down without actually giving any thought to the consequences of that.”

A Foreign Office spokesperson said it was a “worrying time for British crew on board cruise ships around the world”, but it was “primarily the responsibility of their employers” to ensure their welfare and safety.

They added: “The government is in direct contact with these operators about the issues, as well as directly with many crew members and their families, and we will continue to do what we can to ensure UK crew can access flights home.”

Ms Tolhurst has said she is in “constant dialogue” with operators and that seafarers have “responded magnificently” to the coronavirus crisis, “working round the clock to keep the nation fuelled, fed and supplied with vital goods”.

PMQs: Starmer and Johnson on coronavirus in care homes

Sir Keir Starmer said the government was “too slow” to protect people in care homes from coronavirus. The Labour leader quoted advice from the start of the pandemic saying it “very unlikely“ those in a care home would become infected, but now at least 40% of Covid-19 deaths were in care homes. Boris Johnson said […]

Image copyright Getty Images Scotland’s first minister is expected to confirm that the country’s lockdown restrictions are to be eased slightly. Nicola Sturgeon unveiled a four phase “route map” last week which was aimed at restarting society while suppressing the virus. A formal review of the lockdown will almost certainly give the green light to […]

Image copyright PA Media Image caption Pubs reopened to customers last month First Minister Nicola Sturgeon has said she “won’t hesitate” to reintroduce lockdown restrictions if Covid-19 starts to get “out of control”. Tackling the virus while easing lockdown was a “delicate balance” which could easily be thrown off kilter. If that happened, Ms Sturgeon […]