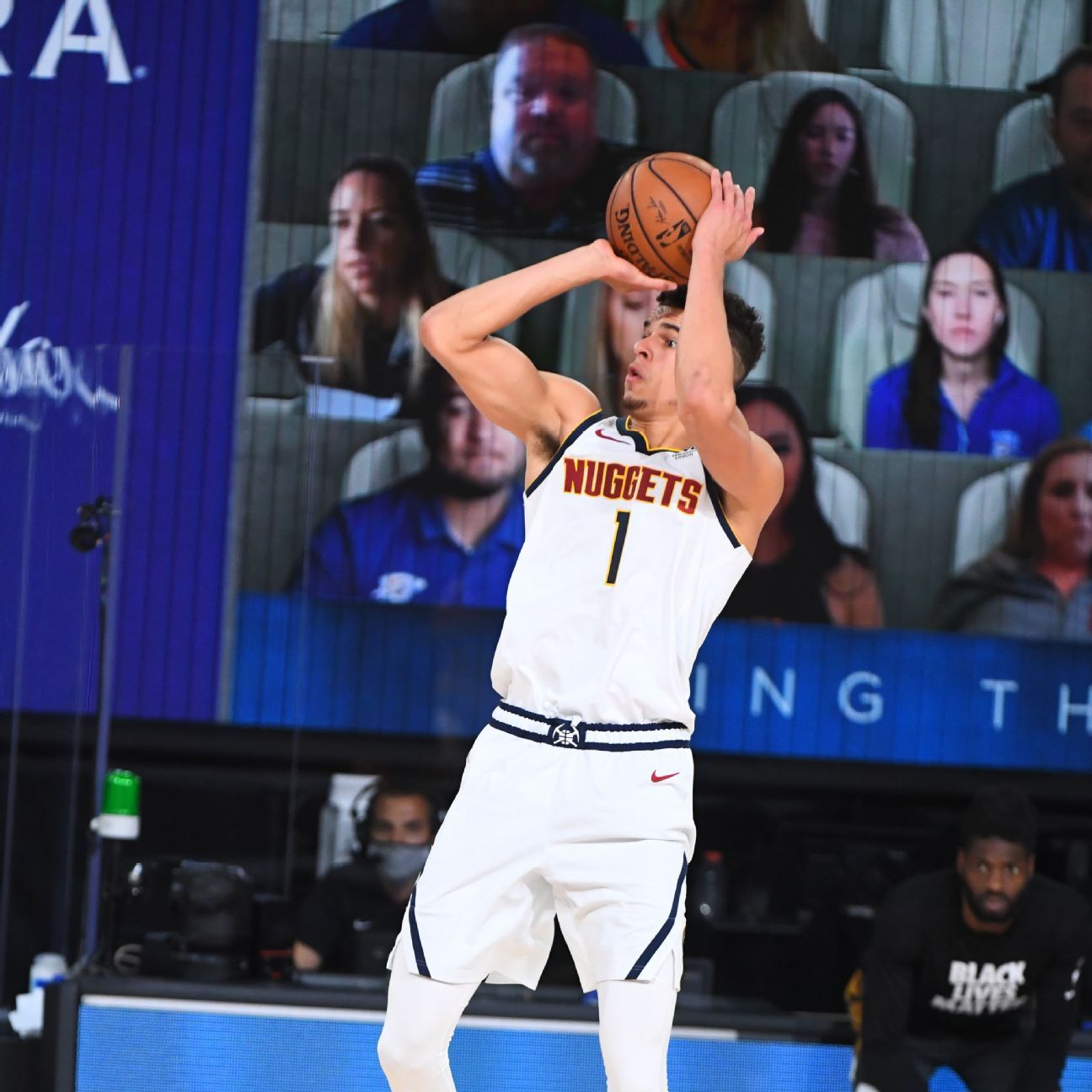 Michael Porter Jr. texted Michael Malone three times over the past few days, telling him he can do better and pleading with the Denver Nuggets coach to stick with the talented rookie.

“I said, ‘Michael, I’m not going anywhere,'” Malone texted back. “I’m gonna stay with you.”

Porter rewarded Malone and reminded everyone of how talented the 14th overall pick in the 2018 draft is, exploding for a career-high 37 points and 12 rebounds Monday in a 121-113 overtime victory over the Oklahoma City Thunder in Lake Buena Vista, Florida.

Porter, who sat out all of last season as he recovered from back surgery, is the first Nuggets rookie with 35 points and 10 rebounds since Carmelo Anthony in 2004. With starters Jamal Murray, Gary Harris and Will Barton all out because of injuries, Porter started and made a massive case for a bigger role once the Nuggets get healthy.

He provided all-star Nikola Jokic with some much-needed help and was a big receiving target for the passing big man. Jokic poured in a triple-double with 30 points, 12 rebounds and 10 assists in the win, which helped Denver (44-23) create a little breathing room in the Western Conference standings between itself and Oklahoma City (41-25).

But it was Porter who showed that he can give the Nuggets another big offensive weapon. The 6-foot-10 forward made 12 of 16 shots overall, including 4 of 6 from behind the 3-point arc. He made all nine of his free throws and was a plus-25 when on the court.

“He’s very, very talented,” Thunder coach Billy Donovan said of the forward, who had 20 points and nine rebounds by halftime. “… The unfortunate part for him is, I think, he’s dealt with a lot of injuries throughout his career and he’s probably learned a lot, maybe not really getting an opportunity to play a whole lot because their team has been so good.

“But he’s got great potential … the biggest thing for him has probably been having to learn their rotations defensively and those kind of things. But he’s very, very gifted.”

During Saturday’s 125-105 loss to Miami, Porter had 11 points, five fouls and was a minus-15 when on the floor. At one point in the third quarter, a frustrated Malone took Porter out of the game and clearly looked disappointed in his rookie and his team’s overall effort, energy and hustle. The coach said after that game that “it’s definitely testing my patience.”

Porter, 22, then began texting his coach between the Nuggets’ last game to this game.

“Especially with Jamal, Gary and Will out, I got to be a guy that steps up and kind of takes on more of a role,” Porter added. “I told him that I understand that and that it wouldn’t happen again.”

Malone loved what he saw from Porter, who averaged 14.2 minutes in 49 games.

“He was outstanding, obviously,” Malone said. “… My biggest disappointment with Michael in the Miami game was the rebounding. He had one rebound in that game. We’ve all grown accustomed to see Michael rebounding at an elite level, and tonight he did that. That’s who he is.

“He’s got tremendous size, length, he can score the ball, he’s got soft touch, he does so in a very efficient manner, but he can also rebound at a very high level, and tonight we saw all those things put together.”

In just a few days, Porter has rebounded from not only a lackluster effort against Miami but also headlines he created last week with comments he made about the coronavirus. Malone said Nuggets president of basketball operations Tim Connelly had to talk to Porter last week after the rookie theorized that the coronavirus pandemic is “being used for population control.”

On the court, Porter says he’s trying to mature and make the mental adjustment of going from a high school superstar to a player trying to fit in on a talented Nuggets team contending in the Western Conference.

“For me, it’s like a different focus,” Porter said. “Because in high school, every single game, I had to carry the scoring load and do that. But on this team, I don’t have to do that. I can’t focus on that. All I got to focus on is bringing the energy and effort and locking in on defense and the rest will take care of itself.

Michael Jordan stands firm on ‘Republicans buy sneakers, too’ quote, says it was made in jest

12:37 AM ET Tim BontempsESPN Michael Jordan addressed one of the most famous quotes of his career — “Republicans buy sneakers, too” — in the fifth episode of ESPN’s “The Last Dance” on Sunday night. Jordan, who has largely stayed away from any political commentary throughout his public life, didn’t back away from the statement […]

Dignitas Female to compete in VALORANT

Featherweight contender Dan Ige extended his win streak to six on Saturday, as he narrowly defeated longtime lightweight Edson Barboza via split decision at UFC Fight Night in Jacksonville, Florida. Ige (14-2) has quietly been on a tear in the UFC’s 145-pound division. His six-fight win streak is tied with current champion Alex Volkanovski and […]