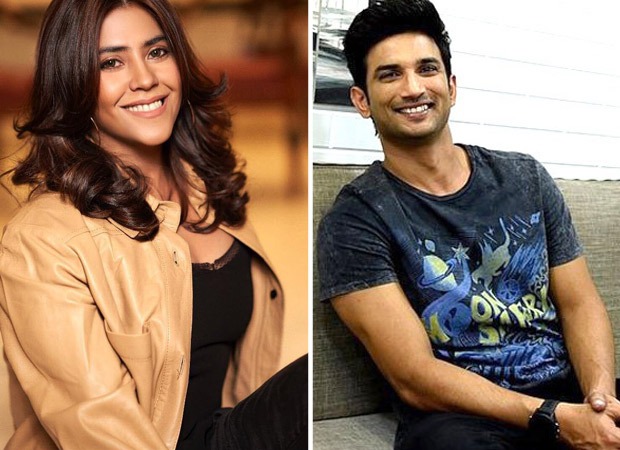 Ekta Kapoor and Sushant Singh Rajput have been very close friends and his demise shook her to the core, needless to say. The duo had interacted on social media only a week prior to his death and a month after his loss, she is still coping with the incident. Sushant Singh Rajput, 34, had a lot of potential and started his career with Kis Desh Mein Hai Mera Dil only to play the lead role in Pavitra Rishta where he shot to fame overnight with his chocolate boy avatar.

Ekta Kapoor has now set up a fund in Sushant Singh Rajput’s memory collaborating with Tarun Katial for the same. She said that it’s her privilege to be a part of the Pavitra Rishta Fund and in times like these, we all were in dire need of mental health awareness. Ekta has revealed that she would love to be a part of such projects in the future as well. There are a lot of factors for mental stress given the current pandemic situation in the country. With multiple things to deal with including job loss and pay cuts, the mental health of the people has been deteriorating.

Ekta Kapoor has surely won a lot of hearts with this initiative.

BAAGHI 3 is the story of a man against a terrorist organization. Ronnie (Tiger Shroff) is the younger brother of Vikram (Riteish Deshmukh). Their father was a cop, Charan Chaturvedi (Jackie Shroff), who had died when both were young. Charan knew that Ronnie is braver out of the two and BAAGHI 3 is the story […]

Multiplexes and single screen owners are hoping that the government will reopen the theatres by June 30 with new safety measures : Bollywood News

It’s been over two months that the country is facing an indefinite lockdown due to Coronavirus. The entertainment industry has taken a massive hit because of the same. For the first time, the shoots and releases have been put on hold and the Multiplex Association of India along with the single screen owners are now […]

THE UNSUNG WARRIOR is an entertaining paisa-vasool film that would be loved by the masses as well as classes.

Off late, Bollywood has been making period dramas, focusing on the brave warriors of the medieval and early modern history of India. While films like MANIKARNIKA – THE QUEEN OF JHANSI and PANIPAT focused on the somewhat known chapters of history, the Akshay Kumar starrer KESARI was based on an incident that wasn’t known to […]