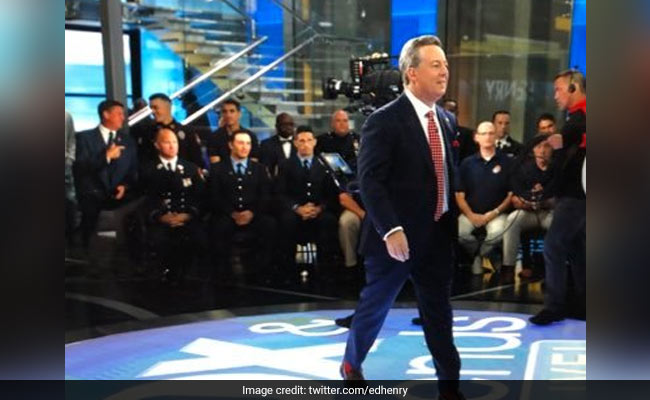 The complaint says Henry “groomed, psychologically manipulated and coerced [her] into having a sexual relationship with him, and that, when she would not comply voluntarily, he sexually assaulted her on office property, and raped her at a hotel.”

In a statement on Henry’s behalf, his lawyer Catherine Foti said evidence would show that Eckhart “initiated and completely encouraged a consensual relationship.”

In a separate statement, a Fox News spokeswoman said Eckhart and co-plaintiff Cathy Areu, a network guest, can pursue their claims against Henry directly with him, as the network “already took swift action as soon as it learned of Ms. Eckhart’s claims on June 25 and Mr. Henry is no longer employed by the network.”

The cable news network, owned by Rupert Murdoch’s Fox Corp, said on July 1 it had dismissed Henry after receiving a complaint from the lawyer of a former employee and retained a law firm to investigate.

Monday’s complaint alleges the network knew Henry had engaged in sexual misconduct as far back as early 2017.

The Fox News spokeswoman said in a later statement on Monday: “There were not sexual harassment claims against Ed Henry at Fox News prior to Jennifer Eckhart’s claim on June 25, 2020.”

Areu alleges Henry sent her “a slew of wildly inappropriate sexual images and videos” and suggested he would assist her career if she had sex with him.

Asked to comment on the allegations in the lawsuit, Foti said: “Ed Henry looks forward to presenting actual facts and evidence, which will contradict the fictional accounts contained in the complaint.”

In its statement the network said that based on an outside law firm’s investigation that included interviews with numerous witnesses, it was determined that Areu’s claims against the network, its management, Carlson, Hannity, Kurtz and Caldwell are “false, patently frivolous and utterly devoid of any merit.”

Reuters was not immediately able to reach Carlson, Hannity, Kurtz or Caldwell but Fox News said its statement was a response on behalf of all four men. Eckhart was an associate producer at Fox Business Network.

The network agreed to pay $20 million to settle Carlson’s lawsuit.

Merkel rejected Trump’s invitation to attend the G7 in person. Then Trump postponed the summit. President Trump told reporters on Saturday that he was postponing a Group of 7 meeting scheduled to be held in the United States next month. Earlier Saturday, Chancellor Angela Merkel of Germany said she would not attend in person, citing […]

Why The Day Is Important In Modern Times

On the Simplicity Day 2020, take some time off from technology to keep things simple. (Representational) New Delhi: National Simplicity Day is observed every year on July 12 to honour the life, work and philosophies of poet, author and leading transcendentalist Henry David Thoreau. Born on July 12, 1817, Thoreau was an advocate of living […]

People are seen on a makeshift raft in a flooded village in Huangshan, Anhui province Beijing: China on Sunday raised its flood response alert to the second highest grade as downpours continued to batter regions along the Yangtze River, with the eastern provinces of Jiangsu and Jiangxi among the worst hit, state media reported. Regional […]