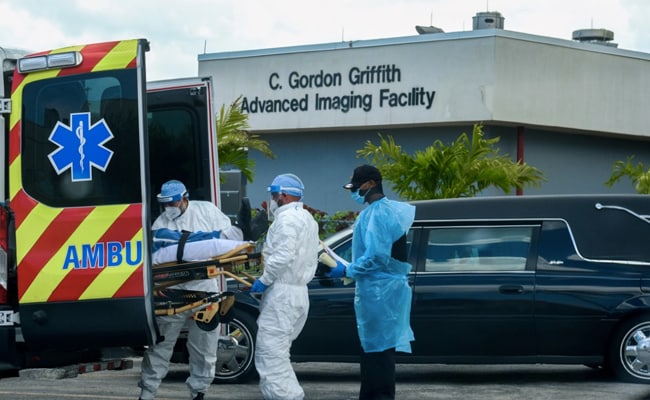 Many countries are testing only symptomatic or the most serious cases. (File)

The number of coronavirus cases recorded worldwide has passed 18 million, according to an AFP tally from official sources at 2240 GMT Sunday.

At least 18,011,763 cases have now been registered as the pandemic’s rate of infection continues to accelerate. A million more cases have been detected in just the last four days.

More than half of the world’s cases have been recorded in the United States and in Latin America and the Caribbean region.

The tallies, using data collected by AFP from national authorities and information from the World Health Organization (WHO), probably reflect only a fraction of the actual number of infections.

Many countries are testing only symptomatic or the most serious cases.

Former Hong Kong governor Chris Patten speaks at the Foreign Correspondents’ Club in Hong Kong, China November 25, 2016. REUTERS/Bobby Yip/File photo “If the international community cannot trust Beijing to keep its word when it comes to Hong Kong, people will be reluctant to take its word on other matters,” they wrote. Reuters WASHINGTON […]

WHO Chief warned against the “politicisation of the pandemic.” (File) Geneva: The World Health Organization chief on Thursday rejected as false an allegation by US Secretary of State Mike Pompeo that he owed his position to a deal with China. Pompeo told a private meeting of MPs on Tuesday that the WHO had become a […]

When It’s Illegal to Travel in Your Own Country

Hi, this is Catherine Porter, a Canada correspondent for The Times, based in Toronto. I am taking over the Canada Letter this week from Ian Austen, who is on vacation. It’s one thing for foreigners to be barred from Canada during a pandemic. But Canadians not being allowed to travel into other parts of their […]