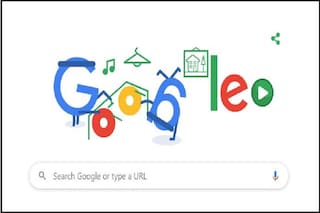 Thursday’s doodle is part of Google’s ‘Stay and Play at Home with Popular Past Google Doodles’ series.

Google said, “As COVID-19 continues to impact communities around the world, people and families everywhere are spending more time at home. In light of this, we’re launching a throwback Doodle series looking back at some of our popular interactive Google Doodle games!”

When users click on the doodle on the Google homepage, they are redirected to the game that has a feature logo graphic created by famed graffiti artist Cey Adams, interactive turntables on which users can mix samples from legendary tracks, and a serving of Hip Hop history – with an emphasis on its founding pioneers. What’s more, the whole experience is narrated by Hip Hop icon Fab 5 Freddy, former host of “Yo! MTV Raps.” On August 11, 1973, an 18-year-old, Jamaican-American DJ who went by the name of Kool Herc threw a back-to-school jam at 1520 Sedgwick Avenue in the Bronx, New York. During his set, he decided to do something different. Instead of playing the songs in full, he played only their instrumental sections, or “breaks” – sections where he noticed the crowd went wild. During these “breaks” his friend Coke La Rock hyped up the crowd with a microphone. And with that, Hip Hop was born.

You Will Not Find Better Noise Cancelling Wireless Earbuds

Sony is well and truly back. After letting most rivals enjoy what can be best referred to as their free period last year, Sony has dropped what can perhaps be safely described as a category changer for wireless earbuds. The Sony WF-1000XM3 follow up a couple of years after the original WF-1000X, but clearly, the […]

Mars 2020, the spaceship carrying NASA’s new rover Perseverance to the Red Planet, is experiencing technical difficulties and is running on essential systems only, the agency said Thursday. “Data indicate the spacecraft had entered a state known as safe mode, likely because a part of the spacecraft was a little colder than expected while Mars […]

We’re still months away from Wonder Woman 1984 — a couple more, thanks to the ongoing coronavirus pandemic — but writer-director Patty Jenkins is already looking forward to the next two films in the Wonder Woman series. In an interview this week, Jenkins revealed more of her thoughts on a Wonder Woman spin-off centred on […]