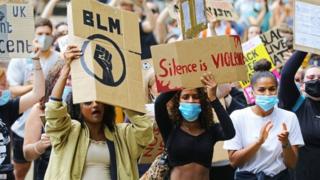 The government is “dragging its feet” over racism and is failing to make it a priority, the chairman of the Equality and Human Rights Commission has said.

David Isaac, who is due to leave his role next week, has told the BBC that ministers should come up with a “coherent strategy” to combat racism.

He has also urged businesses to set targets to recruit more people from ethnic minorities into senior roles.

The government says it is “committed to tackling racism”.

Mr Isaac’s comments come after the death of George Floyd – a black man who was detained by police in America – sent shockwaves across the world. It triggered large anti-racism protests in the UK and the US.

In response, the government announced it would form a new commission on Race and Ethnic Disparities to see what more could be done to eradicate racial and social inequality.

In an exclusive interview with the BBC, Mr Isaac said: “There are lots of people of colour who need supporting and for that reason a coherent race strategy is a top priority and I call upon the government to act urgently.

“I do believe the government is dragging its feet.

“They seek to understand it (racism) but are they taking action and is this a top priority? I don’t believe so.”

Last month, the Prime Minister Boris Johnson said the UK had made “huge strides” in tackling racism but more had to be done.

Mr Isaac believes another review is not the answer.

He said: “The time for more recommendations in my view is over.

“We know what needs to be done. Let’s get on with it.

“There are lots of quick wins such as implementing the ethnicity pay gap for example, so reporting on that I believe would shine a light on some of the disparities we see in relation to income.”

Since 2017 there have been several reviews into racial inequality, including the Lammy review and the McGregor-Smith review.

All have been published with a series of recommendations, some of which ministers say have been implemented.

Mr Isaac also endorsed Lloyds Banks’ recent announcement that it would increase the number of black staff in senior roles as part of a “race action plan”.

“In too many companies around the country, there are not enough senior people of colour,” he said.

“So setting targets and actually putting in place programme to support black and minority ethnic staff to ensure that they flourish in the same way that other people flourish is something the commission has been calling for for some time and now is a moment when businesses must play their part too.”

He also said he understood why people were “rightly outraged” there were no black commissioners in the EHRC, and said he hoped when the new commissioners were appointed in the autumn “they would be truly representative and that would include people of colour and black people”.

In a statement, the government said it was “committed to tackling racism as part of our mission to unite and level-up the country”.

“This new, independent commission is broader in scope in comparison to previous reviews, and builds on the work of the Race Disparity Audit,” it said.

“We continue to take action on recommendations from previous reviews that we have agreed to take forward. This new commission will improve our evidence base to change lives for the better.

“We ask that those with strong views engage with the commission.”

Mr Isaac will step down from the equality watchdog on 8 August after completing a four-year term.

Image copyright PA Media Image caption Nicola Sturgeon said her government would “move heaven and earth” to get schools back to normal Scotland’s first minister has been accused of “dithering” over plans to reopen the country’s schools. Pupils are due to return to a “blended” model of schooling from 11 August that will see learning […]