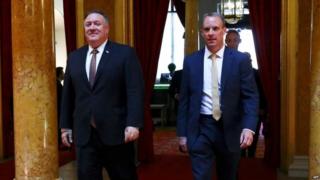 Dominic Raab has insisted the UK was not “strong-armed” by the US into excluding Huawei from its 5G network.

While US sanctions against the Chinese firm had affected the UK’s decision, the foreign secretary said the allies’ interests “overlapped” on the issue.

He said diversifying the UK’s telecoms supply chain was a priority to fill the gap once Huawei’s role ended in 2027.

US counterpart Mike Pompeo said the UK had made the right “sovereign” call and Chinese “bullying” must be resisted.

Speaking at a news conference in London during a two-day visit to the UK, he praised the UK’s recent actions on Hong Kong and suggested it and other allies must stand up to China’s threatening behaviour “in every dimension”.

The US had lobbied the UK to reverse its decision earlier this year to give Huawei a lead role in building the infrastructure for the next-generation mobile communications network.

Last week, the government announced that it would ban domestic mobile providers from buying new Huawei 5G equipment after the end of this year and force them to remove all of its 5G kit from their networks by 2027.

Last week, Mr Pompeo signalled that he hoped the UK would act more swiftly but, speaking in London, he thanked the government for its decision and its actions more broadly against China, saying “well done”.

Mr Raab was asked by journalists whether the UK had effectively been forced into the u-turn by Washington’s decision to sanction both US and foreign firm supplying technology to the Chinese company.

“As a result of US sanctions we have to look with a clear-sighted perspective…and we have taken a decision based on that,” he replied. “But I don’t think there is any question of strong-arming.

“Mike and I always have constructive discussions and, in the vast majority of cases, our views overlap.”

Mr Pompeo acknowledged the two countries had not always agreed over the issue but that the UK had ultimately acted in its own national interests.

“I think the UK made a good decision,” he said.

Asked whether the US wanted to “crush” the Chinese firm, which Washington has accused of state-sponsored espionage, Mr Pompeo said the US would vigorously defend its national security and stop its citizens’ personal data from ending up “in the hands of the Chinese Communist Party”.

No 10 said Boris Johnson had also raised the death of Harry Dunn and the need for “justice” for his family.

The UK continues to seek the extradition of Anne Sacoolas in connection with the 19 year-old’s death in a road traffic collision outside a US military base in Northamptonshire last year.

The US has said it cannot allow Ms Sacoolas, who has been accused of causing Harry Dunn’s death by dangerous driving, to return to the UK to be questioned, insisting she has diplomatic immunity.

In a statement, Downing Street said the PM had made Mr Pompeo aware of the “strong feeling among the people of the UK that justice must be delivered”.

“The prime minister reiterated the need for justice to be done for Harry Dunn and his family,” it said.

The two-day visit is likely to be Mr Pompeo’s last to the UK before November’s presidential election.

Image copyright Getty Images Education Secretary Gavin Williamson has said “we owe it to the children” to get pupils back in school, as he reassured parents it would be safe. Mr Williamson said he knew some parents were “very anxious” about reopening schools, but said it would be a “cautious, phased return”. It follows a […]

Coronavirus: One million miss out on support schemes, MPs say

Image copyright Getty Images More than one million people have fallen through cracks in government schemes designed to support them during the coronavirus crisis, MPs says. The Treasury Select Committee called on ministers to plug gaps in the schemes to fulfil the government’s promise of “doing whatever it takes”. Freelancers and recent employees are among […]

Image copyright Forbes Massie Image caption Architects’ drawings of the replica Commons were released last year MPs finally gave the go-ahead to refurbish the crumbling Palace of Westminster in 2019 after years of wrangling – but will it ever happen? It is hard to imagine a worse look for MPs right now than spending more […]