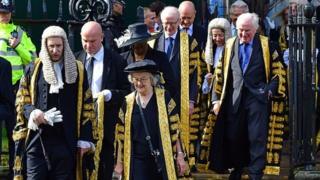 Labour has questioned the independence of a government probe into how its decisions are challenged in the courts, after a former Conservative minister was chosen to head the process.

Lord Faulks will chair a panel looking into potential reforms to the existing system of judicial review.

Senior Conservatives have long argued it is abused for political ends.

But shadow justice secretary David Lammy said the probe was a “blatant attempt to disempower the public”.

Judicial review is a procedure that allows anyone who has been affected by a decision or failure to act by a public authority to apply to the courts to rule whether its actions were lawful or not.

The Supreme Court ultimately ruled that the controversial move was unlawful and overturned it.

In 2017, Ms Miller was similarly successful in challenging former prime minister Theresa May’s government over the need for parliamentary approval of the Article 50 process for leaving the EU.

Mr Johnson has argued that the courts are increasingly being dragged into political matters which should be the preserve of ministers and Parliament.

In their election manifesto, the Conservatives vowed to look into whether the existing system was fit for purpose as part of a wider examination of the relationship between the executive, legislature and judiciary.

The Ministry of Justice said the much narrower review announced on Friday would look at potential reforms to ensure the “right balance” is struck between citizens’ rights and effective governance.

It will examine whether the terms of judicial review should be enshrined in law, whether certain decisions taken by government should not be open to challenge and which remedies should be available to the courts when they find against the executive.

Justice Secretary Robert Buckland said: “Judicial review will always be an essential part of our democratic constitution – protecting citizens from an overbearing state.

“This review will ensure this precious check on government power is maintained, while making sure the process is not abused or used to conduct politics by another means.”

But Labour said the choice of Lord Faulks, a QC and crossbench peer who was a justice minister between 2013 and 2016, to chair the panel raised “serious questions” over its independence.

Mr Lammy said: “The judicial review process is how the public can use the courts to hold the government to account when it acts against the law.

“The Ministry of Justice should be concentrating on getting the courts open safely during the pandemic. This is a blatant attempt to disempower the public and hoard more power in Number 10.”

The rest of the panel is made up of prominent lawyers and academics.

Coronavirus: Face coverings in England’s shops to be compulsory from 24 July

Image copyright Reuters Wearing a face covering in shops and supermarkets in England is to become mandatory from 24 July. Those who fail to comply with the new rules will face a fine of up to £100, the government is to announce. The move will bring England into line with Scotland and other major European […]

Boris Johnson: The prime minister’s year in No 10

Image copyright PA Media It is one year since Boris Johnson became the prime minister of the UK. And it wasn’t 12 months he – or any of us – could easily forget. On the anniversary of his premiership, we take a look at some of the most defining and controversial moments so far. Getting […]

Image copyright Getty Images Nicola Sturgeon has said people’s quality of life is as important as restarting the economy in the wake of the Covid-19 pandemic. The first minister said she was trying to strike a balance between the two after more than nine weeks of lockdown. Ms Sturgeon said Scotland would stay on a […]