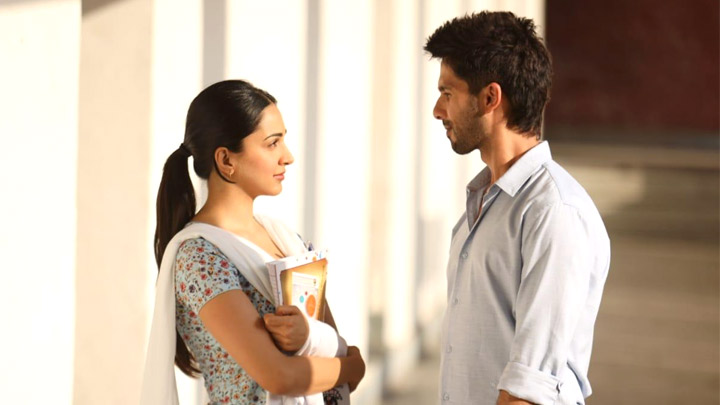 There are very good expectations from the music of Kabir Singh. After all, there are hardly any out and out love stories that are made in the current times and Kabir Singh has the kind of premise that could well be an ideal follow up to Aashiqui 2. Moreover, the film features Shahid Kapoor in the lead and his films have traditionally boasted of good music. The soundtrack here is pretty loaded too with as many as nine songs out there and a team of composers, lyricists and singers coming together to deliver wholesome entertainment.

The album kick-starts with ‘Bekhayali’ and this is pretty much the romantic song of the year so far, what with the perfect combination of music and lyrics making this one really stand out from the crowd. Irshad Kamil brings in just the right kind of ‘dard’ in this heartfelt song about separation and his lyrics have to be heard to be experienced. Sachet-Parampara come up with an excellent composition here and what makes the song further become impressive is the manner in which it is sung. While Sachet Tandon brings himself on board as the lead singer for the first version, it is the Arijit Singh version that truly creates havoc. It is just a perfect Arijit Singh song and would go down amongst his Top-10 greatest numbers till date. Truly beautiful!

Next to arrive is ‘Kaise Hua’ which is composed as well as sung by Vishal Mishra. A song about falling in love and truly experiencing the emotion of it all, this is yet another well written number in Kabir Singh. Manoj Muntashir, who indeed has a knack of coming up with some fine lyrics, does well all over again and the manner in which Vishal sings this one further brings on the passion. Not that this one would turn out to be a major chartbuster in the long run but during the play of the film, it should indeed fetch audience attention.

The one that should emerge as a chartbuster though is ‘Tujhe Kitna Chahne Lage’ which is written and composed by Mithoon. The multi-faceted artist is known for coming up with soulful melodies and the song in question is not an exception either. A beautiful melody which is all heart and loads of love, it is made further special due to the arrival of Arijit Singh behind the mike. The man is magic all over again and while there is one more version as well with Jubin Nautiyal taking charge (who does well too), it is Arijit Singh whom you go back to repeatedly.

Next to arrive is an Irshad Kamil written song that fits in well into the Bollywood scheme of things, something that reminds one of many such compositions that one has experienced in a Yash Raj or Dharma film at the kick-start of the millennium. The style works in 2019 as well with Sachet-Parampara not just composing ‘Mere Sohneya’ but also rendering this one.

Akhil Sachdeva is the composer and singer for ‘Tera Ban Jaunga’ which has Kumaar coming up with simple lyrics all over again. In fact the words that stick with you are ‘Tujhpe Hee To Mera Haq Hai’, though the song has a different title. Tulsi Kumar kick-starts the proceedings and is soon joined by Akhil who ensures that you do give this one a close hearing. A situational number that should arrive at a good juncture of the film and make an impression.

The most experienced singer roped in for the soundtrack makes a rather belated appearance with ‘Yeh Aaina’ which is composed by Amaal Mallik. Starting with the sound of a piano, this is yet another romantic number. That said, the pace of the song is quite slow, which is fine but only as long as the overall composition manages to make an impact. This one in fact reminds one of the kind of music that one had heard in Hamari Adhuri Kahaani and though Irshad Kamil is the lyricist here, overall the song just about fits into the overall soundtrack but that’s it.

The feeling of first love is apparent in ‘Pehla Pyaar’ which has sweet and youthful lyrics by Irshad Kamil with Vishal Mishra’s music too complimenting the same mood. Armaan Malik sings this one which is expected to feature at the beginning of the film once Shahid Kapoor ends up falling in love with Kiara Advani. Just like the last couple of songs from the album, this one too is basically fit-into-the-proceedings song which may not be a chartbuster as a standalone track but would nonetheless keep the listener engaged.

The music of Kabir Singh has a certain consistent theme that runs rights through the soundtrack, hence making it a seamless listening experience. Though not all songs would end up finding a place in the charts, at least a couple of these are set to be huge in time to come.

Ujda Chaman is about a 30 -year-old bachelor Chaman Kohli, a Hindi lecturer with Premature Balding & in quest of a beautiful wife. After facing several rejections as a prospective groom because of his baldness, Chaman hits rock bottom when an astrologer gives him a deadline to find himself a Ujda Chaman is about a […]

In March, shortly after her return from London, singer Kanika Kapoor was diagnosed with Covid-19. She recovered after testing positive for as many as five times, and is now discharged from the hospital. Several rumours suggesting that she dodged the mandatory screening at the airport and later hosted lavish parties at her hometown Lucknow after […]

The much talked about action entertainer Baaghi 3 released last week on Friday across 4400 screens in the domestic market. Directed by Ahmed Khan the film enjoyed the widest release for a Tiger Shroff starrer. Given this wide release and the immense hype surrounding the film, Baaghi 3 was expected to open on a thunderous […]