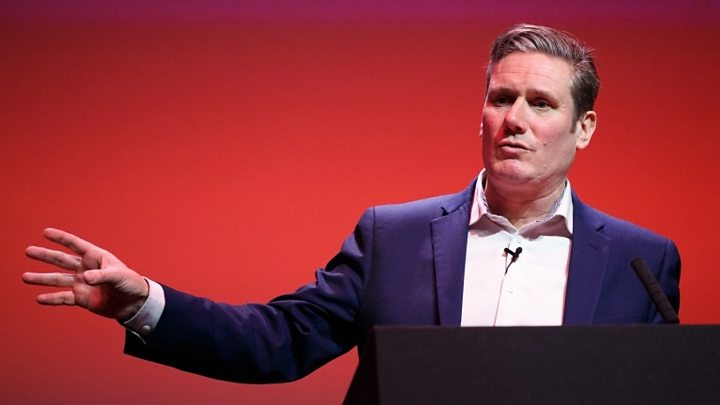 Sir Keir Starmer has been elected as the Labour Party’s new leader.

Widely considered as the frontrunner during the leadership race, Sir Keir was at the heart of Labour’s front bench during the tumultuous years of the UK’s exit from the EU.

So, what else do we know about the former lawyer who is succeeding Jeremy Corbyn?

During the leadership race, Sir Keir pledged to unite the Labour Party and also “retain the radicalism of the last four years”.

But, at his campaign launch in January, he said “factionalism has to go” if the party was to recover from its 2019 election defeat.

And he told the BBC’s Andrew Neil that his “unrelenting” focus as leader would be returning Labour to government at the next election – expected in 2024.

He also suggested that his leadership style would be different to Mr Corbyn’s.

“There are different ways to inspire people. You can inspire people so they want to sit at your feet listening to your next word. That is not me,” he said.

“Or you can inspire people by building a team of people who want to come with you on a journey and change their party and their country. That is what I am building in my campaign.”

He went on to vow to end anti-Semitism, allegations of which have dogged the Labour Party in recent years.

Sir Keir was also forced on to the defensive over his background during the contest, as candidates competed to win over members by emphasising their working class roots.

“My dad was a toolmaker and my mum was a nurse,” he said during the campaign, adding that “not everybody knows that and that’s because I don’t say it very often.”

He gained the support of the UK’s largest trade union, Unison, among others, and the backing of former Labour prime minister Gordon Brown and London Mayor Sadiq Khan.

He was also the first candidate in the race to get enough nominations to make it onto the ballot paper.

Sir Keir was born in 1962 in Southwark, London, to his parents Rod – a toolmaker, and Josephine – a nurse.

Named after Labour’s first MP, Keir Hardie, he was one of four children and the first to pass the 11-plus, getting him a place at Reigate Grammar School.

From there, he went on to study law at the University of Leeds, graduating with a first in 1985, before moving onto post-graduate qualifications at St Edmund Hall, Oxford.

He married solicitor Victoria Alexander in 2007 and the couple have two children.

After graduating from Oxford in 1986, Sir Keir became a barrister at Middle Temple and soon began focusing on human rights law.

He worked on legal battles to get rid of the death penalty in the Caribbean and Africa, and served as human rights adviser to the Northern Ireland Policing Board.

He was also part of the legal team in the so-called McLibel case, defending activists Helen Steel and David Morris over a factsheet they had written about fast food chain McDonald’s.

In 2008, Sir Keir was named the new head of the Crown Prosecution Service and Director of Public Prosecutions.

During this time, he dealt with a number of high-profile cases, most notably bringing the prosecution against two men accused of murdering 18-year-old Stephen Lawrence. Gary Dobson and David Norris were found guilty in early 2012.

Sir Keir stood down as DPP in 2013, and was awarded his knighthood in 2014 for services to law and criminal justice. But he prefers not to use the title.

In December that year, he was confirmed as Labour’s prospective parliamentary candidate for Holborn and St Pancras, London, to replace the retiring Frank Dobson.

He backed the now-Mayor of Greater Manchester, Andy Burnham, to become leader of the Labour Party in the aftermath of the election, but it was Jeremy Corbyn who won the race.

Mr Corbyn appointed him as a shadow Home Office minister, but in 2016, Sir Keir quit the role, joining a number of frontbenchers resigning in protest.

But Sir Keir rejoined the shadow cabinet later that year – this time as shadow Brexit secretary – and arguments around leaving the EU occupied his time in Parliament.

He backed remaining in the EU, and focused his efforts on pushing for transparency from the government around the whole process.

He campaigned for Theresa May to make her Brexit plans public before she started negotiations – a fight he won – and set out Labour’s “six tests” for what a deal acceptable to his benches would look like.

However, he also said publicly that another referendum should remain an option, and that if it happened, he would campaign to stay in the EU.

Some believe he was the driving force behind Labour’s change in position ahead of the 2019 election, promising a second vote.

After the party suffered its worst election defeat since the 1930s, Sir Keir said he had accepted the UK would leave the EU.

Now, he says he will campaign for a close trade deal with the EU, with protections for workers’ rights, the environment, consumer standards and jobs.

Image copyright PA Media Coronavirus testing opens for millions more people in England today after the government loosened rules on who could apply. Testing was expanded last week to all key workers in England and their households. Now, all care home residents and staff, people over 65 and those who must leave home to work […]

Image copyright Getty Images The government is to spend £3.1 million on services supporting children who witness “appalling abuse” at home during the coronavirus lockdown. The funding will be given to councils, charities, and police and crime commissioners in England and Wales. Labour has put forward a plan for a fund of £75 million for […]