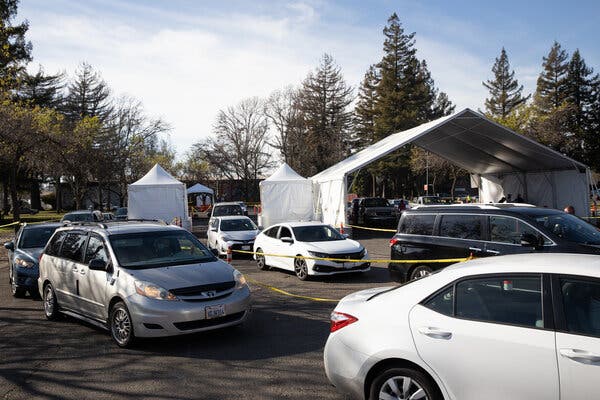 Here’s what you need to know:

The Labor Department is expected to provide further evidence of the pandemic’s economic damage when it issues its weekly report on unemployment claims on Thursday morning.

Economists are bracing for a fresh wave of claims as the coronavirus surge batters the service industry. The government reported last week that the economy shed 140,000 jobs in December, the first monthly drop in employment since last spring, with restaurants, bars and hotels recording steep losses. Forecasters expect a sluggish labor market for the immediate future.

“We know that the pandemic is worsening, and with the jobs report last Friday, we can see that we’re in a deep economic hole and digging in the wrong direction,” said Daniel Zhao, senior economist with the career site Glassdoor. “I expect to see that in Thursday’s claim figures as well.”

The Labor Department’s report, for the week ending Jan. 9, will provide a glimpse of the first full week of the new year and could show a spike in initial claims for state unemployment benefits if the holidays depressed filings in previous weeks.

Pandemic Unemployment Assistance, a federal initiative for freelancers, part-time workers and others normally ineligible for state jobless benefits, may also register a sharp increase in claims as the program ramps up under the $900 billion stimulus package that President Trump signed into law last month.

The labor market has rebounded somewhat since the initial coronavirus wave in the spring. But of the 22 million jobs that disappeared, nearly 10 million remain lost.

“Compared to then, we are doing better,” said AnnElizabeth Konkel, an economist at the career site Indeed, referring to the spring. “But compared to the pre-Covid era, we still have so far to go.”

Still, economists and analysts see better times ahead. As more people are vaccinated, Covid-19 cases will fall, which will ease restrictions on businesses and could lead to a resurgence in consumer activity, helping to revive the service industry.

After giving small lenders a head start, the Paycheck Protection Program will open for all applicants on Tuesday, the Treasury Department said on Wednesday.

The stimulus package passed last month included $284 billion in funding to restart the small-business relief effort, which made $523 billion in loans last year to 5.2 million recipients. The new funding will be available both to first-time applicants and to some returning borrowers.

Borrowers seeking a second loan will need to demonstrate a 25 percent drop in gross receipts between comparable quarters in 2019 and 2020. Second loans will also be limited to companies with 300 or fewer workers, and the amounts will be capped at $2 million.

First- and second-time applicants can borrow up to 2.5 times their monthly payroll. (Those in the lodging and food service business who are seeking a second loan can borrow 3.5 times their payroll, a concession to the devastation those industries have faced.) The loans — which are made by banks but backed by the federal government — can be forgiven if borrowers spend least 60 percent of the money paying workers and use the rest on other allowable expenses.

Starting Tuesday, loans will be available from thousands of lenders, including national banks like Bank of America, JPMorgan Chase and Wells Fargo; most regional banks; and financial technology companies like PayPal.

Some smaller lenders have already gotten started. Community Development Financial Institutions, Minority Depository Institutions and Certified Development Companies — specially designated lenders that focus on underserved populations, including Black- and minority-owned businesses — were allowed to start taking loan applications this week. And on Friday, lenders with $1 billion or less in assets will be allowed to start submitting applications.

The Small Business Administration, which manages the program, has not said how many applications it has already received. Unlike the first round, when the agency approved loans instantaneously, approvals will now take at least a day because of new fraud safeguards the agency has adopted.

Charles Schwab said on Wednesday that it was shutting down its political action committee, perhaps the most significant announcement of its kind since corporations began rethinking their political donations after last week’s violence in the Capitol.

Schwab said it had made its decision “in light of a divided political climate and an increase in attacks on those participating in the political process.”

“We believe a clear and apolitical position is in the best interest of our clients, employees, stockholders and the communities in which we operate,” the company said.

The company’s PAC will no longer take contributions from employees or make financial contributions to lawmakers. It will donate the leftover funds to Boys & Girls Clubs of America and to historically Black colleges and universities, organizations that Charles Schwab has supported in the past.

The company said it stood by its previous political donations, noting that it had “long believed in advocating for an appropriate regulatory landscape for individual investors and those who serve them.” But it said it found the current “hyperpartisan” environment too complex to navigate without risk of distraction.

The Lincoln Project, a group of anti-Trump conservatives, had featured Charles Schwab in a campaign highlighting companies that donated to President Trump or to Republicans in Congress who voted against certifying President-elect Joseph R. Biden Jr.’s victory. Charles Schwab made apparent reference to the campaign in explaining the reasoning behind the shutdown.

“It is a sad byproduct of the current political climate that some now resort to using questionable tactics and misleading claims to attack companies like ours,” the statement said. “We also believe it is unfair to knowingly blur the lines between the actions of a publicly held corporation and those of individuals who work or have worked for the company.”

After the riot at the Capitol, a number of companies, including Goldman Sachs and JPMorgan Chase, paused corporate giving. Others, such as Walmart and Marriott, have said they will halt donations only to the 147 Republicans in Congress who objected to certifying the presidential election result.

Charles Schwab said in its statement that it was confident its “voice will still be heard in Washington” even without a PAC, noting that it is a “major employer in a dozen metropolitan centers.” Other companies that do not have a PAC, like IBM, have said they do not think a lack of one puts them at a political disadvantage.

Brian Brooks, who warned that requiring customers to wear masks during the pandemic could lead to more bank robberies, is stepping down as the country’s top bank regulator, according to an announcement on Wednesday.

Mr. Brooks has served as acting comptroller of the currency since late May. As of Thursday night, Blake Paulson, a career employee of the Office of the Comptroller of the Currency, will take over.

“It has been an honor to serve the United States as acting comptroller,” Mr. Brooks said in a statement. “I am extremely proud of what we have accomplished.”

In the months after he took over the agency following the departure of Joseph Otting, Mr. Brooks rushed to enact a number of changes, including one that would prohibit banks from cutting off credit to the fossil fuel industry and another establishing guidelines for how banks could measure their activities in low-income and minority neighborhoods as required under an anti-redlining law.

Until recently, Mr. Brooks was in line for his job to be made permanent. Despite having already lost the 2020 election, President Trump said on Nov. 17 that he intended to nominate Mr. Brooks to become the comptroller for a five-year term.

But the chances for Mr. Brooks to be confirmed during the lame-duck period of Mr. Trump’s presidency were low, and the Georgia runoff elections have given Democrats control of both chambers of Congress.

Advisers to President-elect Joseph R. Biden Jr. had already begun vetting candidates to replace him after Mr. Biden takes over next week.

When the coronavirus death toll in the United States passed 200,000 on Tuesday, matching projections made by White House experts this spring, many of the right-wing media personalities who had mocked the estimates as overblown were quiet. The death toll, tracked by Johns Hopkins University and a New York Times database, is most likely an […]

(Representative image) NEW DELHI: Diesel price on Monday scaled a new high after prices were hiked for the 22nd time in just over three weeks, taking the cumulative increase to Rs 11.14 per litre. Petrol price was increased by 5 paise per litre and diesel 13 paise a litre across the country, according to a […]

NEW DELHI: The government has identified close to a dozen sectors, ranging from capital goods, defence, pharma and electronics to labour-intensive ones such as textiles and food where it is considering proposals for tax concessions. It is also pushing for land and procedural reforms to attract investment as part of a goal to be self-sufficient. […]