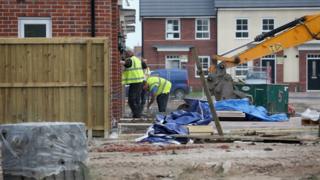 New homes and hospitals will be granted “automatic” permission to be built as part of sweeping planning reforms in England, the housing secretary says.

Robert Jenrick announced a “permission in principle” will be given to developments on land designated “for renewal” to speed-up building.

Shelter has warned against any reforms that lead to small amounts of “bad-quality” housing.

The homeless charity has said 280,000 homes received permission in England between 2011 and 2016 but were never built.

Writing in the Sunday Telegraph, Mr Jenrick said that, under the new rules, land will be designated in one of three categories: for growth, for renewal and for protection.

And he insisted: “We are cutting red tape, but not standards.”

The changes being brought forward this week are expected to only impact England, as national planning policy is devolved to administrations in Scotland, Wales and Northern Ireland.

Mr Jenrick said that the country’s “outdated and cumbersome” planning system had contributed to a generational divide between those who are homeowners and those who are not.

There has been criticism in recent years of the amount of time it takes to get planning permission.

He said that, under the existing guidelines, it takes an average of five years for a standard housing development to go through the planning system.

“Land designated for growth will empower development – new homes, hospitals, schools, shops and offices will be allowed automatically,” he added. “People can get going.”

Areas of outstanding natural beauty and the green belt will be protected.

“For too long home ownership has remained out of reach for too many, as a complex and outdated planning system has failed to keep up with the needs of our country,” Mr Jenrick added.

“I am completely overhauling the system so we can build more good quality, attractive and affordable homes faster – and more young families can finally have the key to their own home.”

He said the new plans will focus on quality and design, drawing on inspiration from the idea of design codes and pattern books that built the picturesque city of Bath, model village of Bournville and wealthy district of Belgravia in London.

Eco-friendly homes with new spaces and parks nearby would be built, he added, saying local authorities will move away from placing notices on lampposts towards an interactive online system.

The Federation of Master Builders, which represents small traders, has previously said construction output fell to historic lows due to the coronavirus pandemic and that streamlining planning applications would bring forward new developments.

Mr Jenrick said the reforms would “create thousands of new jobs, from bricklayers to architects”.

In June, Boris Johnson vowed to “build, build, build” to help Britain bounce back from the pandemic, promising a £5bn package to build homes and infrastructure.

The PM promised the “most radical reforms” of the planning system since World War Two.

The Conservative Party has repeatedly pledged to “build and fund” 40 new or rebuilt NHS hospitals before 2029.

The UK’s planning system was effectively established in 1947, two years after the end of the war, with the Town and Country Planning Act.

Mr Jenrick’s announcement comes a few weeks after he came under fire for his decision to grant planning permission for a £1bn property scheme in east London just before changes to local planning rules and two weeks prior to the developer donating £12,000 to the Conservatives.

The secretary of state denied any link between the events, but accepted that his decision to approve the development was unlawful.

Coronavirus: ‘Vulnerable’ MPs can stay away from Westminster

Image copyright UK Parliament/Jessica Taylor MPs will be able to “self-certify” that they cannot attend Parliament due to reasons linked to coronavirus, the Speaker says. All MPs were ordered back to Westminster this week after a period of being allowed to work from home. But concerns have been raised that those who are shielding for […]

Labour’s Jonathan Ashworth has questioned the speed of lifting lockdown measure while contact tracing is not fully operational and all NHS staff were not being routinely tested. The shadow health secretary said the UK should proceed with caution but “many now fear that the PM is throwing caution to the wind”. Source link 60 SHARES […]

Image copyright Getty Images Almost 900,000 public sector workers, many of whom have fought on the front line against coronavirus, are to get an above-inflation pay rise. Doctors, teachers and police officers are among those who will receive salary increases of up to 3.1% in 2020/21. The Treasury said the cash would come from existing […]