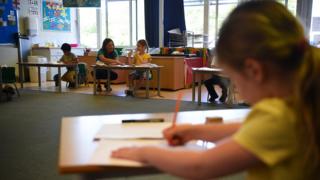 Pupils who have fallen behind during school closures are expected to be offered focused tuition as part of the government’s catch-up plans.

England’s schools will receive funding for support through a national tutoring programme to run for up to three years.

The scheme will use proven tutoring organisations and charities, using volunteer and paid tutors.

Head teachers support the plans but want to be able to use the service to supplement their own catch-up work.

A pilot tutoring project, led by several social mobility groups including the Sutton Trust and the Education Endowment Foundation and Impetus, is looking at how best pupils affected by school closures can be supported.

It is expected that this will be rolled into a national tutoring service, but it is not known how many pupils will be supported or how much is being invested.

The scheme is likely to offer primary pupils support in maths and English in six-week blocks, while secondary pupils would be offered targeted help in specific subjects from specialist graduates and post-graduates.

Summer activity schemes and emotional support are also set to be offered in the run up to schools re-opening in September.

The government said it was drawing up proposals for an extended catch-up last week, adding that they would involve all pupils, not just those from poor backgrounds who are believed to have fared worst during closures.

Keeping students’ eyes on the prize

Nana, 17, from Enfield north London is aiming for a place at Cambridge to study human, social and political science.

Since lockdown began, her tutor with the Access Project has been sending her sample exam questions which she does to time and sends back for feedback.

Weekly face-to-face sessions with a graduate volunteer who works in finance in the City of London, have been keeping her on track.

At first they focused on reading and discussing excerpts from key historical or political texts.

Nana’s mum is a cleaner and her dad is a nursing assistant, and the idea that she could apply to one of the best universities in the world didn’t occur to her until her mentor at the education charity, The Access Project suggested it at the start of Year 12.

“She said: ‘You have the potential, you might as well try,'” Nana remembers.

“I didn’t know about the collegiate system, that you had to do an admissions test or an interview or how important the personal statement was,” she says.

The Access Project has helped her get to grips with all that and drilled into her the importance of wider reading in order to get top grades in her A-levels in history, sociology and English literature.

Now similar schemes could be rolled out to help other young people fulfil their potential at this difficult time.

The government has been under intense pressure over its back to school policy.

Concerns had been raised about the potential for a lost generation of learners, whose education will have been interrupted for at least six months even if schools return, as now planned, in September.

Geoff Barton, leader of the Association of School and College Leaders, agrees there is evidence that high quality one-to-one tuition is beneficial but suspects “the devil will be in the detail”.

“It is enormously frustrating that we haven’t had the opportunity to discuss these points with the government ahead of an announcement and that we once again find ourselves having to guess what they will say.”

The move comes after the education secretary ditched plans for all primary pupils to return to school before the summer break.

However, pupils in Reception, Year 1 and Year 6 have been prioritised and are attending in many schools for at least part of the week.

And pupils facing GCSEs and A-Levels next year are being invited into schools in smaller groups for time with their teachers over the next few weeks.

But this can be anything from a half hour catch-up appointment to a few hours’ learning each week.

The Prime Minister has been accused of “flailing around” over schools.

Labour leader Keir Starmer has called for a national recovery plan, saying the current plan to get pupils back to classrooms were “lying in tatters”.

School capacity is severely restricted by guidelines on social distancing.

Classes have been divided into smaller groups of up to 15 pupils, depending on classroom size, which means only a fraction of children can be on site at any one time.

Schools in Wales are re-opening at the end of June, with only a third of pupils in class at any time,

In Scotland, schools are preparing to re-open on 11 August, and in Northern Ireland ministers are aiming to start bringing pupils back on 17 August.

Have you been affected by the issues in this story? Share your experiences by emailing .

Image copyright Getty Images Image caption Ms Forbes has previously called for a “robust” review of the devolved funding arrangements Scotland’s finance secretary has repeated her call to be allowed to switch capital funding to day-to-day revenue. Speaking ahead of the UK Chancellor’s summer statement, Kate Forbes also called for an end to “arbitrary” limits […]

Dominic Cummings coronavirus row: Government to try to move on

Image copyright Reuters The government is to try to shift focus away from a row about a senior aide’s travels during the coronavirus lockdown – and on to plans to further ease restrictions in England. Dominic Cummings said he believed he had acted “reasonably” and legally when he drove 260 miles from home in March. […]

Russia report committee to be set up ‘imminently’

Image copyright PA Image caption The Intelligence and Security Committee is made up of MPs from all the main parties in Westminster Parliament’s powerful Intelligence and Security Committee (ISC) looks set to be re-established imminently, sources have told the BBC. The committee – which is due to publish a delayed report on alleged Russian interference […]