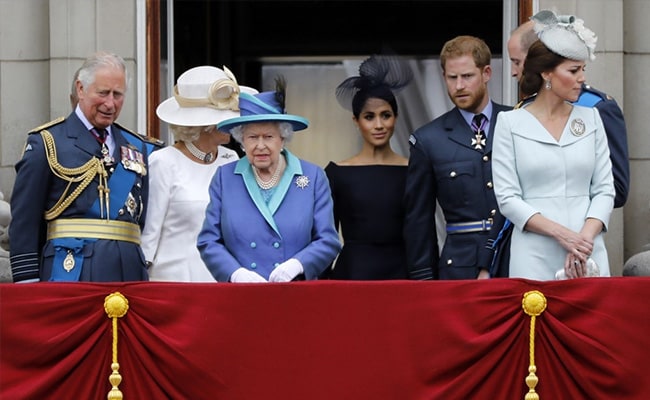 Prince Harry, Meghan made a number of revelations during the course of their two-hour interview. (File)

Prince Harry and his mixed-race wife Meghan have claimed that the British royals were worried how dark their son’s skin might be, during a potentially damaging US TV interview in which she also said she had suicidal thoughts after being hounded by the press.

It came after Meghan accused Buckingham Palace of peddling lies about her. It is the latest instalment in a long-running royal soap opera.

The abdication of Edward VIII, 326 days into his reign in 1936, remains the biggest scandal in modern royal history.

It was over another American divorcee — socialite Wallis Simpson — who he stepped down to marry, sparking a constitutional crisis.

Their union was deemed impossible while Edward was monarch and head of the Church of England, which at the time refused to remarry divorcees while their former spouse was still alive.

Edward was the first monarch in the 1,000-year history of the British Crown to give up the throne of his own free will.

His brother King George VI replaced him and Edward was ostracised by the royal family until the late 1960s. He died in 1972.

In 1952, the then 22-year-old began a romance with her late father’s divorced aide, former Royal Air Force officer Peter Townsend.

Their wish to marry prompted a battle between the disapproving government and the public — which was seen to be sympathetic to the union — with the queen caught in the middle.

Margaret was eventually persuaded to abandon the relationship and instead married photographer Antony Armstrong-Jones in 1960. They divorced in 1978.

The queen memorably described 1992 as an “annus horribilis” after three of her children’s marriages crumbled and a fire devastated her Windsor Castle home.

She then rocked the monarchy by leaking shocking details of palace life to author Andrew Morton for his 1992 book “Diana: Her True Story — In Her Own Words”.

Diana died in a high-speed car crash in a Paris tunnel in August 1997 having been stripped of her royal status.

For the week leading up to her funeral, the monarchy was rocked by an unprecedented outpouring of grief for the popular “people’s princess”.

Anger mounted at the silence of senior royals, who were on holiday at the queen’s Balmoral estate in northeast Scotland.

Newspapers, furious that the Union Jack flag was not flying at half-mast over Buckingham Palace, called on the queen to address her subjects.

Within days she had paid homage to her former daughter-in-law in a televised speech. She also publicly bowed before Diana’s coffin.

Prince Andrew has been dogged by allegations he had sex with one of the teenage victims of deceased US sex offender Jeffrey Epstein.

The prince, often referred to as the queen’s “favourite son”, attempted to clear his name in a disastrous BBC interview in November 2019.

He was forced to “step back from public duties” but remains under pressure to cooperate with US prosecutors and faces fresh scrutiny after the arrest of Ghislaine Maxwell, Epstein’s former partner.

Harry and Meghan walk away

Prince Harry sent the royal family into another spin when he and his American actress wife, Meghan, stepped backed from royal duties in 2020 and moved to North America.

Their departure — dubbed “Megxit” in the British press, which has often been hostile to her — came after an apparent falling out with Harry’s older brother William and his wife Kate.

Last month, the palace ordered the couple to relinquish their honorary titles and patronages.

Relations dived further after the pair gave two TV interviews in the US, including one with Oprah Winfrey in which they alleged racism among the royals and a rift with Harry’s father, Prince Charles.

Meghan also claims that a famous story that she made Kate cry before her wedding was fabricated. “The reverse happened,” she said. It was the Duchess of Cambridge who pushed her to tears over bridesmaid dresses.

Malala, who took bullet for going to school, celebrates her degree from Oxford University

Malala Yousafzai, the youngest Nobel Peace Prize winner who once took a bullet for campaigning for girls’ education in Pakistan, was over the moon on Friday after completing her degree in Philosophy, Politics and Economics at Britain’s prestigious Oxford University. Malala, 22, who attended Oxford’s Lady Margaret Hall college, took to Twitter to share two […]

The OCI card is highly popular among overseas Indians. (Representational) Washington: Indian-Americans have welcomed the Indian government’s decision to simplify the process of maintaining Overseas Citizens of India (OCI) cards, saying more overseas citizens will now opt for this form of residency. The OCI cardholders will now be required to get their document re-issued only […]

Global markets dropped early Friday after President Trump said that he and the first lady had tested positive for the coronavirus. European markets opened more than 1 percent lower with some markets recovering slightly as the day went on. Wall Street was set to open sharply lower, according to futures markets, but intense volatility suggested […]