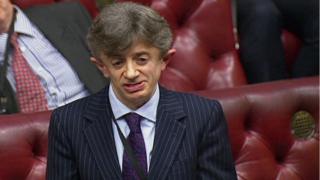 A disabled member of the House of Lords has said a cut in the daily fees for peers during the Covid-19 crisis has left him thousands of pounds in debt.

Conservative Lord Shinkwin said a reduction in the allowance from £323 a day to £162 had been “irresponsible and discriminatory”.

He added the cut, in force since early May, had seen his only source of income “slashed without warning”.

A Lords spokesperson said the allowance “was never intended to be a salary”.

The allowance reduction was meant to reflect arrangements which have allowed peers to take part and vote in debates remotely during the pandemic.

The changes were approved by peers after a recommendation from the Lords Commission, which oversees administration of the upper chamber.

At the time, Lord Fowler, the Lord Speaker, said the fees reduction reflected the fact most peers were no longer incurring accommodation costs whilst staying in London.

Most peers are not paid a salary but are able to claim an allowance for the costs associated with attending Parliament.

In a scathing letter to Lord Fowler, Lord Shinkwin said the cut had taken “absolutely no account of the cost of living in the real world”.

The peer, who was born with a rare genetic brittle bone disease, said the move “discriminates against me as a disabled person”, and made the Lords “less diverse and representative”.

The reduction in fees, he added, had left him living off the savings he had accumulated as a “safety net” in case he was not able to work as a peer.

Unlike other peers, he wrote, he did not have the “platinum plated public sector pension” of former MPs, nor a taxpayer-funded housing allowance.

“Such an ‘I’m alright Jack’ approach shows no consideration for those of us who do live in the real world; who gave up secure jobs to enter the Lords in good faith that the allowances would cover our costs,” he added.

Lord Shinkwin called on the Lords Commission to restore the attendance allowance to its former levels at a meeting on Thursday.

In response, Lords spokesperson said the Lords Commission recognises the “valuable contribution made by all members who participate in the work of the House.”

They added that “like everyone else, the House of Lords has had to take some difficult decisions because of Covid-19.”

“The Commission has given considerable thought to how to respond to this unprecedented situation, in the full knowledge there are no easy solutions that can satisfy all members’ expectations.

“The daily allowance is not, and was never intended, to be a salary.

“The arrangements are being kept under review as these ways of working evolve.”

Man Utd’s Rashford speaks about mother’s sacrifices in his bid to end food poverty Marcus Rashford has called on the government to reverse a decision not to provide free school meal vouchers during the summer, saying that “the system isn’t built for families like mine to succeed”. The Manchester United and England forward has raised […]

Image caption Greater Manchester’s mayor had said Metrolink could be “mothballed” The government has confirmed it will support England’s light rail systems to “allow essential services to continue” during the coronavirus pandemic. The Department for Transport (DfT) said it was working with networks in Greater Manchester, Sheffield, the West Midlands, Nottingham and Tyne and Wear. […]

Coronavirus: All lockdown fines ‘should be reviewed’ – MPs group

Image copyright PA Media Police chiefs are being urged to review every lockdown fine issued in England and Wales amid concerns about “discriminatory” enforcement. A group of MPs back the call, over fears the chances of a fine depend on where you live and that black and Asian people are disproportionately targeted. The group has […]