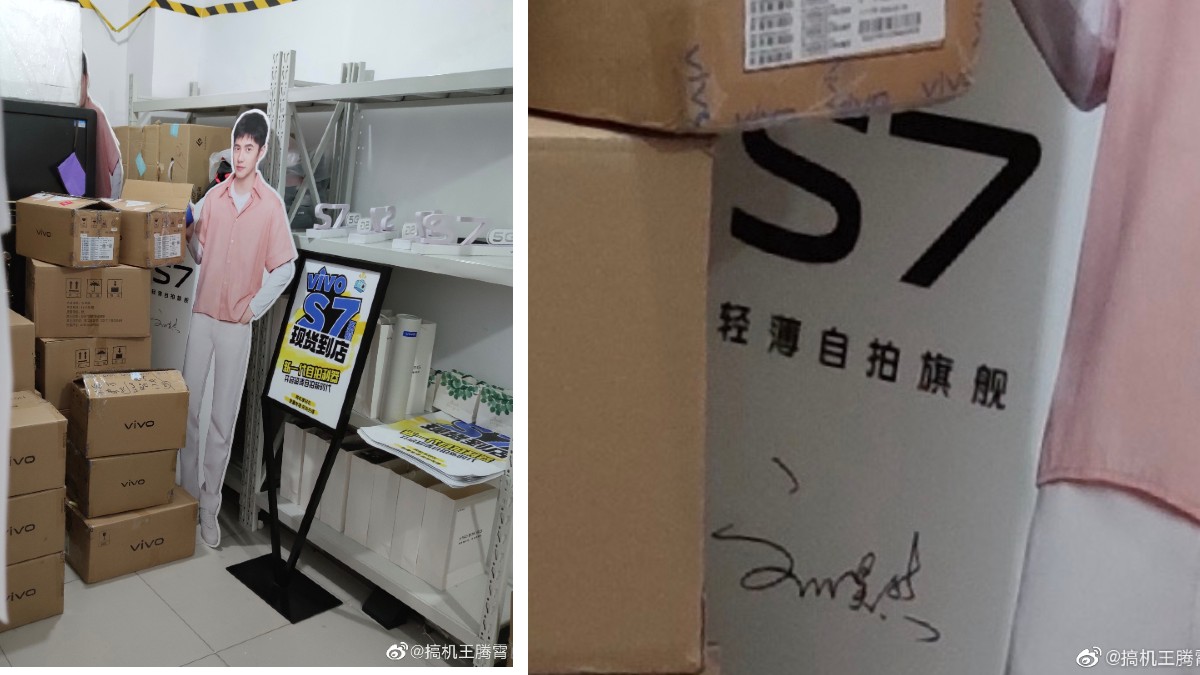 Vivo S7 images have leaked online, showing what seems to be the next phone in the company’s S series with a prominent selfie camera. While the Chinese company hasn’t provided any details about the new smartphone, a couple of images were leaked online that suggest its existence. The Vivo S7 is likely to debut as the successor to the Vivo S6 that was launched in April with 5G support and quad rear camera setup. Similar to the last-generation model, the Vivo S7 would include 5G connectivity. The smartphone also appears to have a lightweight design.

The two images purportedly showing some marketing material of the Vivo S7 have been leaked on Weibo. One of them suggests selfie-focussed features on the new smartphone and gives a glimpse at its back panel that has a blue finish. The other one, which seems to be a cropped version of the first image, highlights its lightweight build.

Since Vivo hasn’t provided any confirmation around the new smartphone, it is best to consider this latest development with a pinch of salt.

Nevertheless, a recent report suggested the launch of a new Vivo S-series phone in August that could be none other than the Vivo S7. The new phone is likely to retain 5G connectivity as well as the quad rear camera setup of the earlier launched Vivo S6. Further, it is speculated to have the octa-core Qualcomm Snapdragon 765G SoC. The smartphone is also likely to come with a hole-punch display design over the waterdrop-style notch available on the Vivo S6. Moreover, it may have a dual selfie camera instead of offering a single sensor at the front.

Last week, Vivo launched the X50 and X50 Pro as its new flagship models in India. Both phones come with the Snapdragon 765G SoC and include up to 256GB of onboard storage. The Vivo X50 Pro, in the new series, also comes with a Gimbal Camera System for enhanced image stabilisation results.

Which is the bestselling Vivo smartphone in India? Why has Vivo not been making premium phones? We interviewed Vivo’s director of brand strategy Nipun Marya to find out, and to talk about the company’s strategy in India going forward. We discussed this on Orbital, our weekly technology podcast, which you can subscribe to via Apple Podcasts or RSS, download the episode, or just hit the play button below.

PES 2021 will be a “season update” as opposed to a full-scale launch, Konami has confirmed, after a week full of rumours. Owing to that and since Pro Evolution Soccer is celebrating its 25th anniversary this year, PES 2021 will be made available at “an affordable anniversary price”. That means it won’t cost between Rs. […]

Apple has reportedly begun a survey where it asks iPhone users questions about how they have been using the charging adapters that came bundled with their older models. This survey comes amidst speculations that the upcoming iPhone 12, expected to release this fall, may arrive without wired headphones or USB chargers. Targeting old users along […]