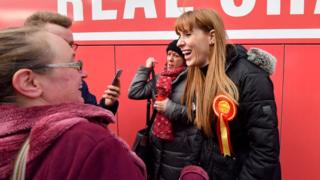 She has been a long-standing member of Jeremy Corbyn’s cabinet, but will now hold one of the key jobs in the party.

So how did she get to this point?

While campaigning to become the deputy leader, Ms Rayner promised to “make the case for everyday socialism rooted in people’s lives”.

She said she wanted more funding for the NHS and social care, along with the establishment of a “National Education Service”.

She also supports nationalising utilities and investing in green jobs, as well as backing new council housing and social security, saying they are “not only morally right but practical solutions to real problems”.

When it comes to the party itself, she wants a “radical shake up” of campaigning, with activist-led community organising, more training and frontline support all year round.

She has also called for Labour “Organising Academies” to train “a new generation of leaders and organisers”.

Ms Rayner says she wants to “rebuild” the Labour movement over the next five years. It will now be down to her and Sir Keir Starmer to see if they can.

Ms Rayner – previously Bowen – was born in 1980 in Stockport.

She left school at the age of 16 after falling pregnant and did not get any qualifications.

Ms Rayner also revealed in an interview earlier this year that she cared for her mother, who had severe depression and attempted to take an overdose when she was young.

Later, she returned to college part-time, and did courses in care work and British Sign Language – crediting Labour’s Sure Start centres for “turning my life around”.

In 2017, Ms Rayner hit the headlines when she became a grandmother at the age of 37.

After announcing the birth of her first grandchild in an early-morning tweet, she gave herself the new nickname “Grangela” and turned it into a hashtag.

She is a close friend of defeated Labour leadership contender Rebecca Long-Bailey – the pair shared a London flat when they started out as MPs.

Ms Rayner got a job in her local council in social work. She became a member, then a trade union representative, for Unison, after requests from her colleagues.

After she took on the role full-time, representing the Stockport branch, she featured in a Guardian series called A Working Life.

At the time, her office was covered in newspaper clippings, picturing her with Gordon Brown and Ed Milliband at Labour Party conferences.

She told the reporter that people always underestimated her, adding: “I’m a pretty young woman, lots of red hair, and everyone expects me to be stupid when I walk into a meeting for the first time.

“I’m not stupid and most people know that now, but I still like to be underestimated because it gives me an edge. It gives me a bit of stealth.”

Ms Rayner later became the most senior official in her region as the convener of Unison North West.

Ms Rayner was selected as Labour’s candidate for Ashton-under-Lyne in 2014 after her predecessor, David Heyes, decided to retire.

Despite her party losing the 2015 general election, she won her seat, and briefly became a member of the housing, communities and local government select committee.

She did not back Jeremy Corbyn in the leadership race to replace Mr Miliband – instead giving her vote to the current Manchester mayor Andy Burnham.

But within months, she was appointed as an opposition whip, before moving to become a shadow minister for the Department for Work and Pensions in January 2016.

Just six months later, she was in line for another promotion after a swathe of resignations from Labour’s frontbench, becoming both shadow equalities minister and, the role held most recently, shadow education secretary.

Throughout her time in Parliament, she has been considered as part of Mr Corbyn’s team – backing him in the 2017 challenge to his leadership – but later described herself as on the “soft Left” of the party.

However, a month after the contest got underway, she criticised Mr Corbyn, saying he “didn’t command the respect” as leader, and claimed she would be more “pragmatic” in a senior role.

Who is Dominic Raab? – BBC News

Image copyright EPA UK Prime Minister Boris Johnson has asked Foreign Secretary Dominic Raab to deputise for him “where necessary,” while he recovers from coronavirus. So who is Mr Raab? Less than three years ago, Dominic Raab wasn’t even in the government. But now, as foreign secretary and first secretary of state, he is the […]

Coronavirus: Boris Johnson says this is moment of maximum risk

Media playback is unsupported on your device Media captionWatch again: Boris Johnson’s full statement outside 10 Downing Street The UK is at the moment of maximum risk in the coronavirus outbreak, Boris Johnson has said, as he urged people not to lose patience with the lockdown. Speaking outside No 10 for the first time since […]