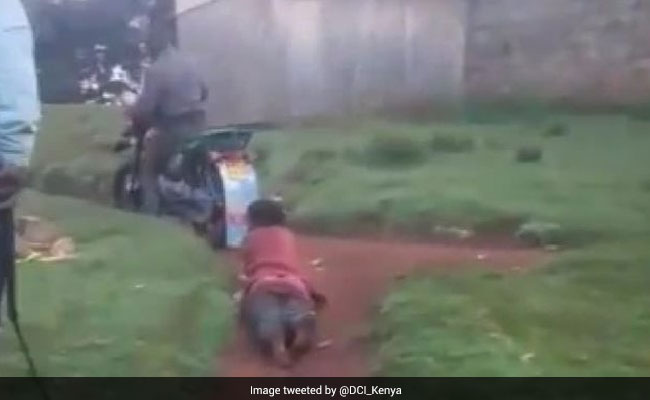 Three Kenyan police officers were arrested Thursday after a video went viral in which they were seen dragging a half-naked woman behind a motorcycle and whipping her over an alleged theft.

The arrest comes after an outcry over police violence in Kenya in reaction to protests sweeping the United States which have prompted soul-searching in Africa, where citizens are routinely brutalised by police with little justice served.

In the one and a half minute video, taken Wednesday in Kuresoi South, west of Nairobi, a police officer is seen riding a motorcycle, the woman being pulled along behind it, while others beat her.

The ordeal causes her trousers to slide off, leaving her naked from the waist down.

The woman was accused of breaking into a police officer’s house, according to a source at the Independent Policing Oversight Authority (IPOA).

“Three officers were yesterday arrested… following circulation of a video depicting a woman being whipped & dragged on a motorbike in Kuresoi South Sub-County,” the Directorate of Criminal Investigations said in a statement.

“The suspects are in lawful custody helping with further investigations into the matter,” it added.

The IPOA also issued a statement saying it had launched an investigation into the matter.

“What about African lives?”

On Monday about 200 people held a protest in Nairobi over the deaths of 15 people at the hands of police since a curfew was imposed in March to fight the coronavirus.

In recent days, cities around the world have seen massive protests against racism and police violence prompted by last month’s police killing of George Floyd, a 46-year-old unarmed black man in the US state of Minnesota.

Floyd’s killing has not led to major protests in Africa, but activists have increasingly called on countries on the continent to look at their own scourge of police brutality, which typically goes unpunished.

Prominent Kenyan commentator and cartoonist Patrick Gathara last week drew an image of a man representing African governments holding up a “black lives matter” placard, while kneeling on the neck of a man asking: ‘What about African lives?”

Somolon Dersso, chairman of the African commission on human rights, in an editorial in South Africa’s Mail and Guardian newspaper called for Africa to “have a much-needed conversation about these killings and other acts of violence visited on our civilian population” during the coronavirus lockdown.

“These conversations should be accompanied by an outpouring of outrage.”

WELLINGTON: New Zealand‘s success in curbing the coronavirus has given it a “safe haven” advantage, allowing the country to be open for investment, Prime Minister Jacinda Ardern said on Wednesday. With just two new infections this week, New Zealand has held down community spread of the virus after a strict lockdown brought social and economic […]

American sentenced to 16 years in Russia on spying charges