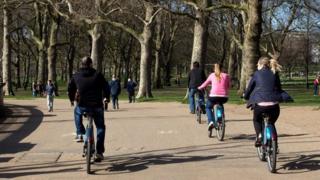 Councils in England will get new powers to shut premises and public places, and cancel events in an effort to deal with coronavirus, Boris Johnson has said.

The measures will come into force on Saturday.

The prime minister also announced that central government would be able to issue “stay-at-home orders” where there are local outbreaks.

These would prevent people leaving defined areas and restrict their use of public transport.

During a Downing Street press briefing, Mr Johnson announced the government’s next range of measures aimed at restarting the economy while keeping the coronavirus infection rate down.

He said employers would get more discretion over asking people to return to workplaces, while indoor performance events would restart from August.

Mr Johnson said greater powers for local authorities would enable them “to act more quickly in response to outbreaks where speed is paramount”.

He added: “Action by local councils will not always be sufficient, so next week we will publish draft regulations on how central government can intervene more effectively at a local level.

“Where justified by the evidence, ministers will be able to close whole sectors or types of premises in an area, introduce local stay-at-home orders, prevent people entering or leaving defined areas, reduce the size of gatherings beyond the national defined rules or restrict transport systems serving local areas.”

A more localised approach, when it comes to tackling Covid, has been used now for some time.

But Boris Johnson is also signalling a tougher approach: new powers for councils and for ministers as well.

One of those powers for central government is quite striking: the ability to prevent people entering or leaving defined areas.

As efforts to get the economy going mean the lockdown is loosening overall, the government’s trying to tighten its ability to crack down on local outbreaks.

Image copyright NHS Digital Image caption The NHS 111 service has seen a huge rise in demand because of the pandemic People should have phone or video consultations with their doctors unless there is a clinical reason not to, Health Secretary Matt Hancock says. He said there had been a “hugely positive” response to virtual […]

The mother of Stephen Lawrence has described how she was stopped by police while driving home late at night, soon after the murder of her son. Baroness Lawrence was addressing the Joint Committee on Humans Rights after Team GB sprinter Bianca Williams accused police officers of racially profiling her and her partner after they were […]

PM urges public not to gather inside as weather worsens

Prime Minister Boris Johnson has urged the public not to be tempted to gather inside, with rain forecast in the coming days after a long period of warm, sunny weather. He said the government specifically relaxed the rules on meeting outdoors because “evidence shows the risks of transmission are much lower”. Source link 60 SHARES […]