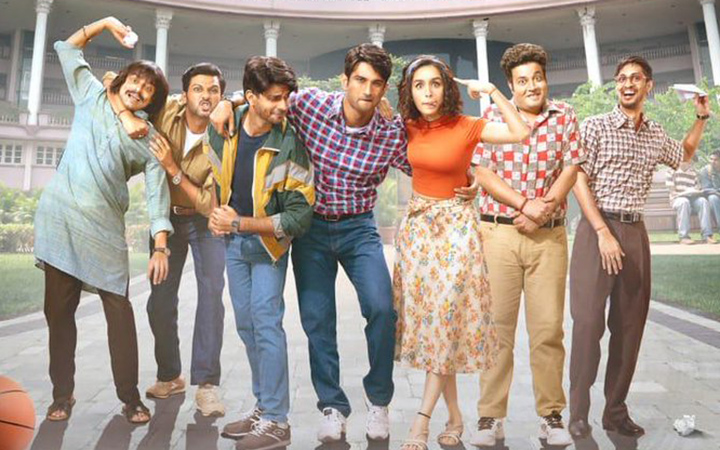 One isn’t really sure of what to expect from the music of Chhichhore. Considering the fact that it is set as a campus entertainer, one expects situational music at best from this soundtrack that has been put together by Pritam and Amitabh Bhattacharya. That said, since the film is produced by Sajid Nadiadwala who has a keen ear for music, one expects some melodies too.

The soundtrack kick-starts with the sound of ‘Woh Din’ and it is just the right kind of number that one expects at the beginning of a film with a campus setting. Had it been a romantic beginning, one may have felt a tad disappointed. Thankfully what one hears here is a beautiful rendition by Tushar Joshi who sings this heartfelt number with simple lyrics and beautiful melody. You are actually transported into the stage and setting of a college and later when the Arijit Singh version arrives, you lap up the song all the more. This one has a long shelf life.

Surprisingly though, the song that follows just doesn’t entertainer. Though set as a kind of number that could well have been an outcome of a jam session in the studio, ‘Control’ tries to be all funny and entertainer but falls flat. There is a horde of singers in the form of Nakash Aziz, Manish J. Tipu, Geet Sagar, Sreerama Chandra and Amitabh Bhattacharya but the overall outcome fails to make any kind of impact despite repeated hearing. It may just manage to make some kind of an impact if picturised interestingly.

Thankfully, the experiment of getting multiple singers together in yet another campus track, ‘Fikar Not’, works quite well. Reminding one of the kind of mood that Pritam had created for ‘Galti Se Mistake’ [Jagga Jasoos], this one by Nakash Aziz, Amit Mishra, Dev Negi, Amitabh Bhattacharya, Sreerama Chandra and Antara Mitra is a fun track all the way. In fact it also carries a good message of thinking only about the current times rather than wasting one’s time and energy in worrying about what future has in hold. This one could work well in a long run.

A happy-sad song comes next in the form of ‘Kal Ki Hi Baat Hai’ and it is after a while that one hears K.K. in a Pritam composition. A situational number about recollecting the good times gone by, it comes across as a track that would play on as a montage sequence. One just hopes that since this one has a slow pace composition wise, it doesn’t slow down the film’s narrative when it plays on screen.

The song that is set to grow quite well in time to come though is ‘Khairiyat’, which is also the best of the soundtrack. This one appears in a couple of versions, one happy and one sad by Arijit Singh. A song which is about a lover wondering if the one whom he believes to be his life no less even thinks about him while being far away, ‘Khairiyat’ boasts of a beautiful melody and deserves to be played in loop. Though it has been released recently, one just wonders about the kind of distance it would have already covered had it arrived a couple of weeks back.

The music of Chhichhore is the kind that grows on you and has the potential to make an even better impression when heard and experienced in the context of the film. This one has a classy feel to it.

Bollywood Hungama was the first to break the news of this fresh pairing. On Saturday, we informed you about Prabhas’ next will be with Bollywood star Deepika Padukone. On Sunday morning, the makers made an official announcement of the same. The film will be directed by the young and immensely talented director, Ashwin Nag, who […]

If he had lived the next stage in his career for Sushant Singh Rajput was not film production as some vested interests would like us to believe, but theatre. Sushant was constantly in search of expanding his creative horizons. In this endeavour he was exploring the theatre. Confirming this, filmmaker Rumi Jaffery who is a […]

A history of the homosexual movement in India is incomplete without the mention of the 2008 film Dostana. Starring Abhishek Bachchan, John Abraham and Priyanka Chopra, this comic caper, directed by Tarun Mansukhani, went a long way in normalizing the conversation around the gay community. The film was a moderate success at the box office […]