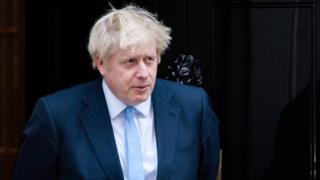 The prime minister has pledged his government will “not go back to the austerity of ten years ago” ahead of a speech next week.

In an interview with the Mail on Sunday, Boris Johnson set out his plans for a post-Covid economic recovery.

They will include a new taskforce, led by the chancellor, which he says will look at speeding up the building of hospitals, schools and roads.

The economy shrank by 20.4% in April – the largest monthly fall on record.

Amid continued criticism of the way his government has handled the pandemic, the PM said ministers will be “doubling down on levelling up” – spending on infrastructure in order to “build our way back to health”.

“We’re going to make sure that we have plans to help people whose old jobs are not there any more to get the opportunities they need.

“We are absolutely not going back to the austerity of ten years ago,” he told the paper.

The new Infrastructure Delivery Taskforce will look at major projects in the pipeline and remove “bottlenecks at every step of development and delivery”.

No 10 hopes a building boom will boost jobs and improve connectivity for cities, towns and villages.

The membership of the taskforce, led by Chancellor Rishi Sunak will be set out in “due course”, a Downing Street spokesperson said.

Number 10’s confirmation of an infrastructure drive follows a call by ex-Tory prime minister Sir John Major for tax rises to be avoided while the country looks to get back on its feet.

Sir John said tax rises during the current situation would be a “mistake” and urged the government to borrow in order to exploit the low interest rates available at present.

And former Chancellor Sajid Javid has previously warned against a return to austerity, calling for low taxes on businesses to help the UK’s recovery.

Boris Johnson has faced serious criticism for the way his government has handled the coronavirus outbreak – and questions are likely to continue as ministers look to ease the lockdown in England.

But evidently keen to try and get his wider political agenda back on track, the prime minister is returning to the phrase that was so frequently used in last year’s general election campaign – “levelling up”.

It means spending on infrastructure – schools, transport and the NHS.

So, how will these big projects be paid for?

With billions already spent to support the economy during this pandemic, borrowing, big time, seems on the cards.

The number of workers on UK payrolls dived more than 600,000 between March and May, official figures suggest, with economists warning the full effect on employment will not be felt until wage support schemes end.

Almost nine million workers who are unable to do their job because of the pandemic have had their wages paid by the government under its furlough scheme.

But firms will have to start paying towards the scheme from August, and it will close entirely in October.

In a major easing of England’s lockdown, the PM announced on Tuesday that pubs, restaurants and hotels were among the list of venues that would be allowed to reopen from 4 July.

But the announcement was criticised by some businesses – such as indoor gyms – that were not included on the list.

The Observer reported that a further one million people could become jobless if further government support is not announced by August, adding to the 2.8 million already out of work.

New House of Commons Library analysis, commissioned by the Labour Party, suggests that unemployment levels could soar to levels not seen since the 1980s – tipping past the peak of 3.3 million seen in 1984 under Margaret Thatcher, the paper said.

Shadow business secretary Ed Miliband said: “The scale of the economic emergency facing us is enormous. But the government is pulling the rug from under businesses employing one million people by demanding they start bearing the cost of the furlough when they don’t even know when they can reopen.

“The government’s approach will put jobs, businesses and livelihoods at risk which will impose costs on us all. Sectors in distress should get special help, and the furlough scheme, and economic support must go hand in hand with public health measures designed to keep us safe.”

A Downing Street spokesperson said: “The coronavirus response has shown that it doesn’t have to take years to get essential projects off the ground – the Nightingale hospitals and ventilator challenge were up and running in a matter of weeks.

“As we recover from the pandemic we must apply that same urgency to the major projects at the foundations of this country and get them done right, to truly level up opportunity across the UK.

“There’s now no excuse for delays. Infrastructure has the power to rebuild and repair our country – and we will do it better, faster and more strategically than before.”

Image caption There are approximately 3.21 million hectares of woodland in the UK The public are being asked how and where they would like millions of new trees to be planted across England. Ministers have launched a consultation on how to meet their pledge of trebling current planting levels to cover 30,000 hectares a year […]

Communities Secretary Robert Jenrick has said the rate of coronavirus infection is low enough to allow those who have been shielding to do “modest things”. It comes a day after scientific advisers to the government warned of the risk of lifting the lockdown in England too soon About 2.5 million people in the UK were […]

Image copyright Getty Images Image caption Warm weather saw some people in London go out and enjoy the sunshine on Thursday People should continue obeying the coronavirus lockdown this bank holiday weekend, ministers have said, despite sunny weather forecast in some areas. Foreign Secretary Dominic Raab said it was “important” the public follows the current […]