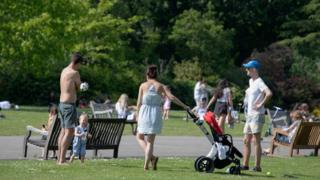 People in Scotland are now able to meet friends and family again as the country begins to ease its lockdown after 66 days.

The new rules mean that people from two households can meet outside so long as they keep at least two metres apart.

Groups of no more than eight should meet at a time, and you should not go into anyone else’s house.

First Minister Nicola Sturgeon has stressed that people should still stay at home as much as possible.

Scotland has been in lockdown since 23 March, and did not make major changes to restrictions when they were introduced in England earlier this month.

Ms Sturgeon said on Thursday there had been a “sustained and unmistakable” downward trend in the spread of the virus over a number of weeks, meaning changes could now be made.

The first phase of the Scottish government’s four-phase “route map” for restarting society while attempting to suppress the virus is now in place.

It comes as the UK government announced that groups of six people from different households will be able to meet outside in England from Monday, with similar measures expected in Wales.

Meanwhile, outdoor weddings with 10 people present may be allowed in Northern Ireland from 8 June.

What can you now do in Scotland?

People can meet residents of one other household at a time – as long as meetings are kept to a maximum of eight people and they are outside in areas like a park or a private garden.

People will also be able to take part in some non-contact sports, including golf, tennis, fishing and bowls, and councils are due to reopen their recycling centres from Monday.

Sunbathing in parks and open areas is now be allowed, as is travelling locally for recreation – although the Scottish government’s “strong advice” is they should not go further than five miles (8km).

Most outdoor work that has been put on hold can resume, garden centres can reopen and site preparation can begin in the construction industry.

From Monday, teachers and other staff will be able to return to schools to prepare for re-opening – although most pupils will not return until 11 August.

What’s happening elsewhere in the UK?

On Thursday evening, Prime Minister Boris Johnson provided some more details of the changes planned in England – saying that the UK government’s thinking was based on the scientific belief that transmission is far less likely to happen outdoors.

For that reason, he said people could hold gatherings of up to six people from different households in their gardens from Monday and could even host barbecues, providing they maintained social distancing and took extra care with regular hand-washing when preparing and sharing out food.

In Wales, it is expected that people from two households will be allowed to meet outdoors from next week – but they will be asked to “stay local” when planning such meetings.

Wales’ First Minister Mark Drakeford told BBC Radio 4’s Today programme that the rate of infection was falling “slower than we had hoped” – so Wales had “only limited headroom” to make changes.

In Northern Ireland, “groups of four to six people who do not share a household can meet outdoors maintaining social distancing”.

From 8 June, car showrooms and shops in retails parks are expected to be given the green light to begin trading again.

What if I’m shielding?

The changes in Scotland do not change the circumstances of those in the “shielding” group – those who are most vulnerable to the virus.

Ms Sturgeon said she realised this would be “hard” for them, and said her government was trying “to move to less of a blanket approach”.

She said: “I want you to know today that you have not been forgotten, and you are a central part of our thinking as we consider how we move forward.”

Is the virus still spreading in Scotland?

The Scottish government estimates that there are between 10,000 and 25,000 infectious people in Scotland – down from an upper estimate of 35,000 on 8 May.

But ministers also believe that Covid-19 is spreading much more slowly now than a few weeks ago.

Figures from Public Health Scotland (PHS) show that the number of new infections has been steadily declining since mid-April.

By all measures, the number of new deaths from the virus is also going down.

PHS data shows a clear decline in the deaths after a positive test for Covid-19, and National Records of Scotland statistics show a similar pattern in cases where Covid-19 is mentioned on the death certificate

The number of excess deaths above a five-year average has also been decreasing each week since a peak in early April.

Ms Sturgeon has warned against becoming complacent even though restrictions are beginning to ease, saying: “The virus is still out there – lockdown is being modified slightly, but it is not over.”

However, the first minister told BBC Scotland’s Reporting Scotland that she was hoping to meet family at the weekend.

“Like everybody else it will be really difficult not to hug my mum and dad but I know that is for their protection,” she said.

“I have a dilemma because my mum and dad and my sister and niece and nephew don’t live too far apart, so I am going to have to choose one over the other.

“No doubt I’ll be getting lobbied by both of them and if that is not the case then that will be a message in there for me. Maybe they will choose to see each other rather than me over the weekend – who knows.”

The route map for easing lockdown

The Scottish government has identified four phases for easing the restrictions:

Phase 1: Virus not yet contained but cases are falling. From 28 May you should be able to meet another household outside in small numbers. Sunbathing is allowed, along with some outdoor activities like golf and fishing. Garden centres and drive-through takeaways can reopen, some outdoor work can resume, and childminding services can begin.

Phase 4: Virus no longer a significant threat. University and college campuses can reopen in full, mass gatherings are allowed. All workplaces open and public transport is back at full capacity.

Image copyright AFP Boris Johnson has been talking frankly about the period he spent seriously ill in hospital with coronavirus. In an interview with the Sun on Sunday, he says he was given “litres and litres of oxygen” to keep him alive. He says during a week in London’s St Thomas’ Hospital, with three nights […]

Image copyright Getty Images Image caption The development would have built 1,500 new homes on Westferry Road, the Isle of Dogs Housing Secretary Robert Jenrick has accepted he approved a £1bn east London housing development unlawfully. The 1,500-home development on the Isle of Dogs, Tower Hamlets, was approved on 14 January – the day before […]

Image copyright Reuters The UK government is conducting a new review into the impact of allowing Huawei telecoms equipment to be used in British 5G networks. The National Cyber Security Centre involvement comes after the US brought in fresh sanctions on the Chinese company, citing security fears. In January, the UK resisted US pressure to […]