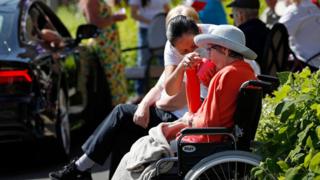 The decision to allow hospital patients in England to be discharged to care homes without Covid-19 tests at the start of the pandemic has been described as “reckless” by MPs.

The Public Accounts Committee said there had clearly been an “emerging problem” with official advice before it was “belatedly” changed in April.

It accused ministers of being slow to support social care during the crisis.

The government said it had been “working closely” with the sector.

The committee said around 25,000 patients were discharged into care homes in England between mid-March and mid-April to free up hospital beds.

After initially saying a negative result was not required before discharging patients, the government later said on 15 April all patients would be tested.

In a highly critical report, the cross-party committee said the initial decision to allow untested patients into care homes was an “appalling error”.

The committee says that, by September, the government should review which care homes took discharged patients, and how many went on to have outbreaks.

In its evidence to the committee, Public Health England said nationwide testing capacity was limited to 3,500 tests per day at the start of the crisis.

The agency added that it had agreed with the NHS and chief medical officer to prioritise testing for those in intensive care and those with respiratory illnesses, along with limited testing in care homes to detect outbreaks.

However the committee said the policy of discharging untested patients continued “even once it was clear there was an emerging problem”.

Regular testing for staff and residents in care homes in England was rolled out earlier this month.

Elsewhere, the committee expressed concern about NHS use of public money when securing private hospital treatment for patients at the start of the pandemic.

It said NHS England had failed so far to provide “even a rough estimate” of costs, criticising an “apparent lack of transparency”.

The MPs also said the costs of building England’s Nightingale hospitals lacked transparency and “are also not yet known”.

Under a funding package to help the NHS prepare for the winter, the temporary hospitals are due to be maintained until the end of March 2021.

Shadow social care minister Liz Kendall said the report confirmed the government “was too slow to act to protect older and disabled people”.

“A series of mistakes were made despite clear warnings from what was happening in other countries,” the Labour MP added.

A spokesman for the Department of Health and Social Care said it has been “working closely with the sector and public health experts” to develop guidance throughout the “unprecedented global pandemic”.

The spokesman added an extra £1.3bn had been given to the NHS to speed up hospital discharges, while testing had been introduced for all care home residents and staff.

This includes “repeat testing for staff and residents in care homes for over-65 or those with dementia”, they added.

Image copyright Jessica Taylor/UK Parliament MPs have held a minute’s silence in memory of George Floyd, the black man whose death in US police custody has sparked a global wave of protests. The House of Commons chamber, as well as virtual committee hearings, fell silent at 11am on Tuesday. Since Mr Floyd’s killing on 25 […]

Coronavirus: Widen rules on where face coverings must be used, say UK doctors

Image copyright Reuters Image caption Some people across Britain, including here in Manchester, already choose to wear masks Doctors have urged the government to make face coverings compulsory in all places where social distancing is not possible, not just on public transport. All passengers on public transport in England must wear a covering from 15 […]

More than one in four UK workers now furloughed

Media playback is unsupported on your device Media captionPersonal finance expert Martin Lewis says he wants an end to ‘furlough shaming’ online Some 8.9 million workers are now covered by the government’s furlough scheme, the Treasury has said. More than a quarter of the UK workforce is now being supported by it and the cost […]