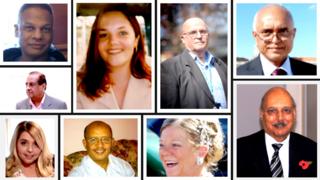 A minute’s silence will be held across the UK later to commemorate the key workers who have died with coronavirus.

Prime Minister Boris Johnson, who returned to work on Monday, will join the tribute, which starts at 11:00 BST.

More than 100 NHS and care staff have died with the virus, as have many transport and other key workers.

NHS England medical director Stephen Powis said he hoped “the whole nation” would show how much their “contribution is remembered and appreciated”.

Chief nursing officer Ruth May added: “Every death is a tragedy but we feel the loss of fellow health and care workers particularly keenly.”

It comes as hospitals in England start planning to restore some NHS services that had to be postponed because of the pandemic.

The latest daily figures show a further 360 people died with the virus in UK hospitals, taking the total number of deaths to 21,092.

This number includes 82 NHS staff and 16 care workers who were confirmed to have died in hospital in England. Last week, BBC analysis of the published figures found that at least 103 health workers had died with the virus across the UK.

The overall UK deaths figure does not include people who died in the community – for example in care homes, or people who have died in their own homes.

It has received the backing of the government and the prime minister, who has only just returned to work after being treated in intensive care for the virus.

“We will be asking everybody who works in the government to take part and we would hope that others will take part nationwide as well,” the PM’s official spokesman said.

A flag is to be flown at half mast at Lancashire Teaching Hospitals NHS Foundation Trust, which will be among many medical venues around the country where staff will pause to pay their respects to their colleagues.

Dame Donna Kinnair, chief executive and general secretary of the Royal College of Nursing, said the moment “will bring together a sombre but grateful nation”.

She added: “This must not be the last time that sacrifice is recognised. The country and its leaders owe a tremendous debt to these key workers and the many more who are on shift again today.”

Labour Party leader Sir Keir Starmer, meanwhile, said too many front-line workers had lost their lives, adding: “We owe it to them to make sure they’ve got the right equipment, in the right place, at the right time.”

On Monday, the government announced that families of front-line NHS and social care staff who died with the virus would receive a £60,000 compensation payment.

Prerana Issar, NHS chief people officer, said that NHS England was considering how to formally commemorate all those who have died while working to care for others once the health service was through the peak of the virus.

Transport for London said the underground and bus network would be brought to a halt for the silence as the workforce honoured its colleagues, with passengers being asked to join in.

On Monday, the prime minister, speaking outside No 10 for the first time since recovering from the virus, urged people not to lose patience with the lockdown.

Mr Johnson said once the UK had met the five tests for easing restrictions – which include a consistent fall in the death rate and making sure the NHS can cope – “then that will be the time to move on to the second phase” in the fight against the outbreak.

He said the restrictions would not be relaxed too soon and details on any changes will be set out over the “coming days”.

Meanwhile, some NHS services that had been paused because of the crisis will resume in England, starting from Tuesday.

At the start of the outbreak, there was a widespread cancellation of non-urgent operations, such as hip and knee replacements, and some treatments.

Mr Hancock said the “exact pace” of the restoration of services depended on the number of Covid-19 patients a hospital was still treating.

VE Day: How is it being celebrated this year?

Image copyright Getty Images Image caption VE Day marked the end of fighting in Europe in World War Two The coronavirus outbreak means people are commemorating the 75th anniversary of VE Day within their own homes. All public gatherings have been cancelled – but a series of events is still going ahead to mark the […]

Image copyright PA Media Some NHS managers have tried to stop doctors speaking publicly about shortages of personal protective equipment, the BBC has been told. WhistleblowersUK said more than 100 healthcare workers had contacted them since the beginning of March, raising concerns about Covid-19 and PPE. The Department of Health said no one should be […]