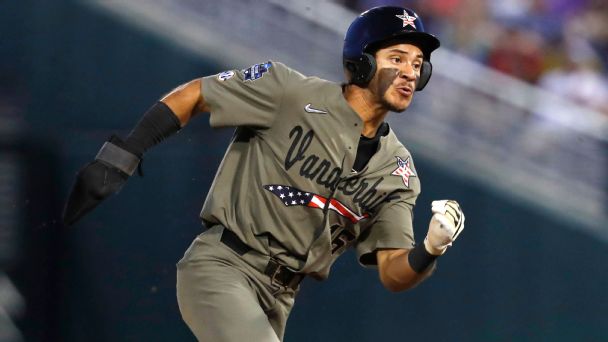 In this most abnormal of springs, the Detroit Tigers may make an abnormal pick with the first selection in the 2020 MLB draft: a first baseman.

Arizona State slugger Spencer Torkelson is regarded not just as the top talent in the draft, but as the safest pick in a draft with an extra dosage of uncertainty due to the sudden halt of college and high school seasons back in March. He mashed 48 home runs his first two seasons at ASU, he produced in two summers while using a wood bat, and he was off to a great start this year, hitting .340 with six home runs in 50 at-bats despite seeing few pitches in the strike zone.

Still, Torkelson is a first baseman and, depending on how you judge these things, only one pure first baseman has ever been selected with the first overall pick since the draft began in 1965 — Adrian Gonzalez, by the Marlins in 2000. No college first baseman and no right-handed-hitting first baseman has ever gone with the first pick, so Torkelson is aiming for a unique spot in draft annals. It’s not a lock that the Tigers will select him, but it’s worth noting the scouting director who drafted Gonzalez for the Marlins was Al Avila. The general manager for the Tigers? Al Avila.

Undrafted out of high school in Petaluma, California, Torkelson exploded onto the college scene with one of the best freshman seasons in history, leading the nation with 25 home runs. He followed that up by hitting .351 with 23 home runs as a sophomore. Scouts love his plus-plus raw power, his advanced approach and his bat speed, all of which have allowed him to display power to all fields. He’s an above-average defender at first base and athletic enough that he has played a little outfield as well. To top it off, he’s young for his draft class, not turning 21 until late August.

Torkelson was a slam dunk to break Bob Horner’s school record for home runs — he was three away — and the Sun Devils had even prepared a video tribute from past ASU greats like Horner and Reggie Jackson congratulating Torkelson on the record. Torkelson declined to be interviewed with the draft approaching, but he spoke on a conference call back in April and said Horner had reached out to him after the season was canceled.

“He was super sad,” Torkelson said. “He was like, ‘That record needs to be broken.’ I think he might have been more mad than me. I’m going to think about that forever. It sucks, but it is what it is at this point.”

Torkelson has been back home in California during the quarantine, calling himself a “pretty solid dog walker” and having his uncle throw batting practice. “It gives me goosebumps just talking about getting drafted,” he said. “To be in conversation at the very top is very humbling and nice to have.”

In his latest mock draft, ESPN’s Kiley McDaniel gave the Tigers an 85% likelihood of drafting Torkelson and 15% likelihood of taking Texas A&M lefty Asa Lacy, who had a 2.13 ERA in 2019 and had allowed just two runs in 24 innings so far in 2019 with 46 strikeouts. The Tigers have top pitching prospects Casey Mize, Matt Manning and Tarik Skubal on the brink of the majors after all pitched in Double-A in 2019, but aside from 2019 first-round pick Riley Greene, the system appears lacking in impact bats, especially one with Torkelson’s power potential.

“I know there’s been a lot of talk about the need for a bat,” Tigers amateur scouting director Scott Pleis told reporters in late April. “We have a lot of really good arms, and knock on wood, they all continue to stay that way. It’s a tough thing when you take these guys, because if you start thinking more needs than anything else, you might pass on a guy that’s quite a bit better.”

Who will become your favorite team’s next big thing? Watch the 2020 MLB draft live to find out.

The COVID-19 pandemic obviously changed the traditional scouting season. MLB made teams halt scouting operations in mid-March as a way of creating a level playing field. Arizona State hadn’t even entered conference play yet, and given that Torkelson had walked 31 times in 17 games, Tigers scouts have been watching a lot of video — from 2019. Teams are allowed to speak with draft candidates via phone and video conferencing.

“Really, we’re doing everything but going to the games right now,” Pleis said. “We’re doing all the same stuff. We’re getting to know the players, we’re evaluating as far as reading the reports and going over them, branching off and doing a lot of the video reports and the analytics. Every tool we possibly have, that’s what we’re doing.”

The obvious comparison to Torkelson is Andrew Vaughn, his Pac-12 rival from Cal who went third overall to the White Sox in last year’s draft — the highest a first baseman had been selected since Eric Hosmer also went third overall, to the Royals in 2008. Kiley puts a 55 Future Value grade on Torkelson (on the 20 to 80 scouting scale), the same grade he put on Vaughn in his list of top 100 prospects back in March. Since they played in the same conference, and both players hit right-handed, a straight statistical observation is instructive:

Vaughn, nearly 17 months older, hit for the higher average with the better strikeout-to-walk ratio, but Torkelson had a slightly higher rate of extra-base hits. Note Torkelson’s spike in his walk rate this season, from 14.2% to 37.8%. This is what the Tigers can dream on: a 30-homer first baseman who hits for average with a high on-base percentage. In other words, a future star worthy of the No. 1 overall pick.

Here’s the thing, however: There are no guarantees in the baseball draft. Even the first pick is no sure thing. Surely you remember Steve Chilcott or Danny Goodwin or Al Chambers or Shawn Abner. The Padres selected Matt Bush over Justin Verlander. The Astros selected Mark Appel over Kris Bryant.

As a general rule, teams don’t like to take first basemen in the first round — and especially not in the top 10. Shortstops and center fielders are usually the best athletes on the diamond and scouts prefer a well-rounded player with a high pick. A shortstop can reach the majors because of his defense or move to another position. For example, Justin Upton, the first overall pick in 2005, and brother B.J., the second pick in 2002, were both high school shortstops who became outfielders as major leaguers. A center fielder can move to left field or right field. A good-hitting third baseman can always move to first base if necessary. A first baseman, however, has to hit.

That arguably makes first base the riskiest position to draft (aside from the injury risk that pitchers bring). Only second basemen are drafted less often in the first round than first basemen. Here are first-round picks by position since 2000, broken down into top-five, top-10 and top-30 choices:

Gonzalez, Hosmer and Vaughn are the only top-five first basemen in the past 20 drafts, but there’s another alarming aspect to first-round first basemen: Most of those drafted in the past two decades struggled to hit as projected. Only two of the 24 became what you would label a star — Gonzalez and Prince Fielder — and only two others (Hosmer and James Loney) have reached 10 career WAR. The list:

Even if we ignore the five picks from the past three drafts who are still in the minors, that’s a success rate of about 10% for a star player and 20% for a solid regular. Remember, these would be players drafted because of a high degree of confidence in their ability to hit — reflecting just how hard that tool is to project.

An interesting trend at the major league level is that, relative to all other hitters, first basemen are hitting worse than ever. The OPS+ of first basemen in 2019 was 111, the lowest figure since a 110 mark in 1951. First basemen produced the same .800 OPS as right fielders in 2019 and barely outhit third basemen (.798) and left fielders (.790). I would suggest, then, that there is a need for more elite offensive first basemen — certainly the case for the Tigers, who finished next-to-last in the majors in OPS at first base and had a historically bad offense overall.

Torkelson fits that need and looks like a player who will need little time in the minors, but there are other considerations. His advisor is Scott Boras, so that adds a twist to the negotiating process. The Tigers also love pitching in the first round and SEC pitchers in particular. Five of their past seven top picks have been pitchers, with three of those coming from the SEC (Mize, Alex Faedo and Jonathan Crawford). That makes Lacy an intriguing possibility. Vanderbilt infielder Austin Martin is another possibility if the Tigers perhaps want to strike a deal and save money to deploy later in the draft.

(In fact, it’s possible the first six picks will be college players, which has never happened. The record is five straight to start a draft, which happened in 1992 and 2018. Florida prep outfielder Zac Veen appears to be the high schooler most likely to crack the top six.)

Still, Torkelson remains the odds-on favorite to go No. 1.

“There will be statistical analysis on the numbers that would’ve been from mid-March all the way through the season that won’t get analyzed. That’s significant,” Avila said in April. “But at the end of the day, we have to do the best with the information we’ve got, which is good information. We’re going to use the information we have to make the best decision possible.”

If that decision lands on Torkelson, we’ll see history. Then the Tigers will hope they landed the next Paul Goldschmidt or Pete Alonso — and not the next Matt LaPorta.

CHARLOTTE, N.C. — Denny Hamlin closed NASCAR’s iRacing Series with a victory at a simulation of throwback North Wilkesboro Speedway. The Daytona 500 winner was instrumental in organizing his fellow Cup drivers for the invitational series that started after the series was suspended. Hamlin, who races barefoot on a top-of-the-line simulator, won the opening iRacing […]

The New York Giants have begun the process of scouting potential training camp sites outside of their team facility in East Rutherford, New Jersey, should it be their only option this summer. At this point, it’s a long shot and simply being considered an emergency option. Coach Joe Judge said on a conference call with […]

Alex Antetokounmpo, the youngest brother of NBA superstar Giannis Antetokounmpo plans to skip college and play professionally in Europe to prepare for the NBA. Alex Antetokounmpo, who graduated from Dominican High School in Wisconsin, told EuroHoops.net of his plans Saturday. He had reportedly received offers to play at DePaul, Ohio and Green Bay. “I am […]