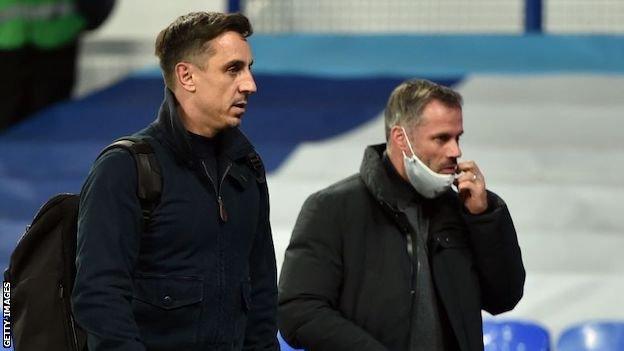 Several former footballers have launched a parliamentary petition calling for an independent regulator in English football.

Gary Neville, Jamie Carragher, Rio Ferdinand and Gary Lineker are among 23 ex-players and journalists to undersign an open letter to fans.

The petition was signed by more than 20,000 people in its first hour.

For it to be considered for a parliamentary debate, 100,000 signatures are required.

“As football fans, we were appalled by the attempt to set up a European Super League,” reads the letter, which has also been signed by Jamie Redknapp and Micah Richards.

“It was a direct threat to the integrity of the game; destroying the concept of sporting merit and open competition.

“Supporters came together with one voice to oppose the cynical power-grab by a group of wealthy owners. The furious protests were heard and the breakaway fell apart.

“Now we must make sure this never happens again. Without swift and direct intervention, the return of a European Super League will be a constant threat.”

In addition to an independent regulator, the petition also calls for government legislation which would stop Premier League clubs from attempting to abandon the football pyramid.

Arsenal, Chelsea, Liverpool, Manchester United, Manchester City and Tottenham all withdrew from the European Super League within 48 hours of its launch after fans protested.

The move was criticised by the UK government, which has brought forward a fan-led review into English football that will consider ownership, finance and supporter involvement in the game.

“We welcome the fan-led Government review of the game and hope it leads to lasting change on an array of important concerns; including co-ordinated strategies to deal with racism, supporters’ representation within clubs, LGBTQ issues, ticket costs and the distribution of income,” the letter added.

“All of those aims can be realised if we take decisive action now.”

‘I couldn’t count how many times I went missing’

Image copyright Elsie Image caption Elsie says social services saved her life Is the local authority care system in England failing children who run away and what happens to those who go missing? The BBC has uncovered evidence of young people disappearing off the radar for weeks, months and, in some cases, years. “I couldn’t […]

Image copyright PA First Minister Arlene Foster has said she cannot currently “stand beside” Michelle O’Neill and “give out public health advice” after the deputy first minister’s attendance at a funeral. Mrs Foster said the executive’s credibility had been damaged and she should stand down while investigations take place. Ms O’Neill has defended attending the […]