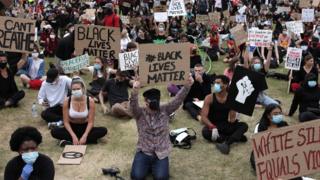 Thousands of people have joined a protest in London over the death of African-American George Floyd in US police custody nine days ago.

It comes as UK chief constables said they stand alongside all those “appalled and horrified” by his death.

In a joint statement, they said the right to lawful protest was a “key part of any democracy”.

But they stressed coronavirus restrictions, including not gathering in groups of more than six, remained.

Protests began in the US after a video showed Mr Floyd, 46, being arrested on 25 May in Minneapolis and a white police officer continuing to kneel on his neck even after he pleaded that he could not breathe.

The officer, Derek Chauvin, has been charged with third-degree murder.

Prime Minister Boris Johnson said on Wednesday that Mr Floyd’s death had been “appalling” and “inexcusable”, but was criticised for failing to comment on the killing before now.

SNP Westminster leader Ian Blackford said the UK government had “shuttered itself in the hope no-one would notice”.

Meanwhile, Labour leader Sir Keir Starmer called on the PM to convey to US President Donald Trump the UK’s “abhorrence about his response to the events”.

Demonstrators gathered in London’s Hyde Park for the protest organised by campaign group Black Lives Matter, before marching south through the city.

It followed days of protests in US cities including Washington DC, Los Angeles, Houston and Seattle, after the Floyd case reignited deep-seated anger over police killings of black Americans and racism.

Tens of thousands of demonstrators have taken to the streets there – not only to express their outrage at the treatment of Mr Floyd – but to condemn police brutality against black Americans more widely.

Organisers in the UK asked people to spread their arms out to maintain a two-metre distance from each other and were seen handing out gloves, as crowds chanted “the UK is not innocent”.

Protesters marched to Victoria Station, where they hung a sign reading “justice for Belly Mujinga” – referring to a railway worker who died with Covid-19 after being spat at while at work.

They then continued towards Westminster, where protesters blocked the roads outside Parliament.

Star Wars actor John Boyega made an emotional speech to fellow protesters on Wednesday, in which he said the crowds were “a physical representation of our support” for Mr Floyd along with two other black Americans who controversially died in the US, and Stephen Lawrence who was killed in a racist attack in London in 1993.

He said he was speaking from his heart and did not know whether he would still have a career after speaking out.

“I need you to understand how painful it is to be reminded every day that your race means nothing – and that isn’t the case any more, that was never the case anymore,” he went on.

Earlier, one activist attending the protest, Brogan Baptiste, told the BBC: “It’s imperative that all of us, whether you’re black, white, that you’re involved in this because we need change and we need it now.”

Filippa, a 20-year-old student who also joined the protest, said: “I know that I’m healthy. So this felt more important than to stay inside when I have the opportunity.”

In their joint statement, the National Police Chiefs Council said: “We stand alongside all those across the globe who are appalled and horrified by the way George Floyd lost his life. Justice and accountability should follow.

“In the UK, we have a long-established tradition of policing by consent, working in communities to prevent crime and solve problems.

“Officers are trained to use force proportionately, lawfully and only when absolutely necessary,” the statement continued.

“We strive to continuously learn and improve. We will tackle bias, racism or discrimination wherever we find it.”

The police leaders added that “sometimes we fall short” but “when we do, we are not afraid to shine a light on injustices or to be held to account”.

They said UK police “uphold and facilitate” the right to lawful protest and “we know people want to make their voices heard”.

However, amid the coronavirus pandemic they stressed restrictions on gatherings were still in place and urged people to “continue to work with officers at this challenging time.”

This latest protest follows another on Sunday, which saw thousands gather in Trafalgar Square, in central London.

Meanwhile, campaign group Stand Up to Racism (SUTR) is urging Britons to “take the knee” on their doorsteps for a socially distanced protest at 18:00 BST.

SUTR said the campaign was inspired by the kneeling protest staged by American football star Colin Kaepernick in 2016 that has become synonymous with the Black Lives Matter movement.

On Tuesday evening, civic buildings in cities including London, Liverpool and Cardiff turned purple to honour Mr Floyd’s memory, with other cities around the country promising similar tributes on Wednesday evening.

Image copyright PA Media The government’s ability to test people for coronavirus has been “inadequate” throughout the pandemic, a committee of MPs has said. The Science and Technology Committee said capacity had not been increased “early or boldly enough”. It said a lack of capacity had driven initial decisions in mid-March to scale back contact […]

Coronavirus: What are the UK travel quarantine rules?

Image copyright Getty Images Further details on government plans to introduce a two-week quarantine period for people arriving in the UK are expected soon. So what do we know so far? What are the new quarantine rules? Any passengers arriving in the UK by plane, ferry or train will have to provide an address where […]

Coronavirus: All non-essential shops to reopen from 15 June – PM

Media playback is unsupported on your device Media captionBoris Johnson announces date for non-essential shops in England to reopen All non-essential retailers will be able to reopen in England from 15 June, Boris Johnson has announced, as part of plans to further ease the lockdown. However, the move is “contingent on progress in the fight […]