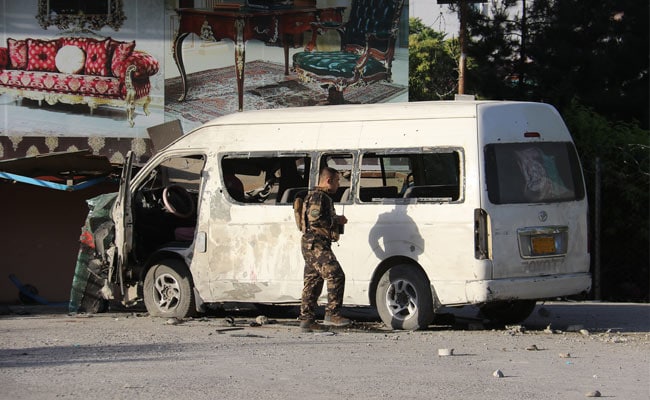 Pictures shared on social media showed a white minibus with extensive damage to its front.

A roadside bomb killed a journalist and driver after struck a minivan carrying employees of a private Afghan television channel in Kabul on Saturday, killing a journalist and the driver, the network’s news director and officials said.

The interior ministry also confirmed the attack, saying the minivan had been targeted.

“The target of the blast was the vehicle of Khurshid private TV,” a ministry statement said.

Pictures shared on social media showed a white minibus with extensive damage to its front.

It was the second such attack targeting employees of the channel in less than a year.

In August 2019, two passers-by were killed when a “sticky bomb” — a type of homemade explosive attached to vehicles with magnets — struck a similar Khurshid TV van.

No group claimed responsibility for that attack, which wounded three employees, and no one immediately claimed Saturday’s attack.

Afghanistan is one of the world’s deadliest places for journalists, who face many risks covering the country’s long conflict and who have sometimes been targeted for doing their job.

The latest attack comes during an overall drop in violence across much of Afghanistan since the Taliban offered a surprise three-day ceasefire on May 24.

While the truce ended on Tuesday night, violence has largely remained low, though Afghan security forces have suffered some attacks that authorities blamed on the Taliban.

As Protests Engulf the United States, China Revels in the Unrest

The cartoon shows the Statue of Liberty cracking into pieces, a police officer breaking through its copper robe. A man’s head lies on the ground in front of the White House, its facade splattered with blood. “Beneath human rights,” says the title of the cartoon, which was published by People’s Daily, the Chinese Communist Party’s […]

Want to get The Morning by email? Here’s the sign-up. The partisan divide over the virus is growing. The Senate is coming back to Washington. And now we have “murder hornets” to worry about. Let’s start with the partisan divide. Open or closed? Washington, D.C., has become one of the new hot spots for the […]

Wuhan has reported six new coronavirus cases over the weekend Beijing: Authorities in the Chinese city where the novel coronavirus emerged launched an ambitious campaign on Wednesday to test all of its 11 million residents, after a cluster of new cases raised fears of a second wave of infections. At least two of the city’s […]