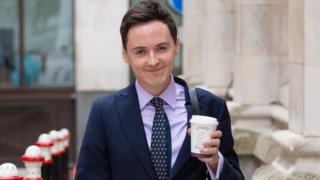 The Metropolitan Police has ended its investigation into two pro-Brexit campaigners after allegations made by the Electoral Commission.

The Met said it stopped pursuing the case after considering advice from the Crown Prosecution Service.

Mr Halsall said he was “delighted” that his “three year nightmare is over”, while Mr Grimes said he was “thrilled”.

But the pair repeated accusations against the Electoral Commission that it was politically biased against Leave campaigners.

A spokesman for the Commission said it was “right that potential electoral offences are properly investigated by the appropriate authority”.

He added there was “no substance to allegations that the Commission is biased”, saying the organisation had investigated campaigners and parties across the political spectrum, including on both the Leave and Remain sides of the EU referendum.

In July 2018, the Commission fined Vote Leave, saying during the referendum campaign two years earlier, the group had exceeded its £7m spending limit by funnelling £675,315 through pro-Brexit youth group BeLeave.

But Vote Leave – whose campaign was fronted by Boris Johnson and Michael Gove – said the accusations were “wholly inaccurate” and politically motivated.

The Electoral Commission confirmed at the time that it had referred Mr Halsall and Mr Grimes to the police in relation to false declarations of campaign spending.

It said it had handed over files “in relation to whether any persons have committed related offences” that fall outside the watchdog’s remit. Both men denied the claims.

Mr Halsall and Mr Grimes launched appeals against the fines, but Vote Leave released a statement in March 2019, saying it was dropping its appeal, having run out of money to pursue it.

However, after launching a crowdfunding campaign, Mr Grimes continued with his appeal and his fine was overturned four months later.

The Commission insisted its investigation had been “thorough and fair”.

A statement released by the Met Police on Friday said it received material from the watchdog and had submitted a file to the CPS in October 2019, asking for early investigative advice.

It confirmed it got a response at the start of March 2020, adding: “This advice has now been duly considered and no further action will be taken.”

Coronavirus: What are the UK travel quarantine rules?

Image copyright Getty Images Further details on government plans to introduce a two-week quarantine period for people arriving in the UK are expected soon. So what do we know so far? What are the new quarantine rules? Any passengers arriving in the UK by plane, ferry or train will have to provide an address where […]

Image copyright PA Media Coronavirus testing opens for millions more people in England today after the government loosened rules on who could apply. Testing was expanded last week to all key workers in England and their households. Now, all care home residents and staff, people over 65 and those who must leave home to work […]

Matt Hancock on testing for care home staff and residents