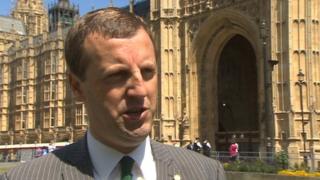 An MP has accepted a police caution after an incident where officers were called to his home last month.

Jonathan Edwards, 44, was arrested on 20 May on suspicion of assault.

In a statement, the Carmarthen East and Dinefwr MP, since suspended by Plaid Cymru, said he was “deeply sorry” and it was “the biggest regret” of his life.

His wife, Emma, has also released a statement, saying she has “accepted her husband’s apology”.

Mr Edwards has referred himself to Plaid Cymru’s internal disciplinary committee and been suspended from the party.

When he was arrested in May, the party suspended the whip from Mr Edwards which meant he was effectively sitting as an independent MP.

Accepting a caution is an admission of guilt and details will be retained in police records.

Alun Ffred Jones, the chairman of Plaid Cymru, said: “We are aware of the personal statement made by Mr Edwards, who recognises his actions fall below what is expected.

“Mr Edwards issued the statement with the support of his family and we ask that their privacy is respected.”

A personal statement released on behalf of Jonathan Edwards said: “I am deeply sorry. It is by far the biggest regret of my life. I complied fully with the police and acted with the best interests of my wife and children as my primary motive throughout.”

He added: “My priority now is to work with my wife to ensure as stable a future as possible for our family.”

A statement on behalf of Emma Edwards said: “I have accepted my husband’s apology.

“Throughout the decade we have been together he has been a loving and caring husband and father.

“As far as I am concerned the matter is now closed.”

Mr Edwards, an Aberystwyth University graduate, has held the Carmarthen East and Dinefwr seat since 2010. He formerly worked as an official for Plaid Cymru and for Citizen Advice Cymru.

Theatre and music figures say roadmap is ‘meaningless’ without support

Image copyright AFP A government roadmap for the return of live theatre and music has been met with calls for financial support and a timetable for reopening, with many dismissing the plan as inadequate. The five-step roadmap did not come with dates or monetary help attached. Actors’ union Equity said that without investment to save […]

Image copyright Getty Images The reopening of schools in England is expected to take place in a “phased manner”, says the Education Secretary Gavin Williamson. He told the Education Select Committee the date for opening would depend on scientific advice – but schools would get “as much notice as possible”. But when pupils start returning […]

The Prime Minister has backed his aide Dominic Cummings, saying he “acted responsibly and legally and with integrity”. It comes after a row over Cummings’ travel to the North East during lockdown, which he has said was for childcare reasons due to the fact that he and his wife were about to be sick with […]