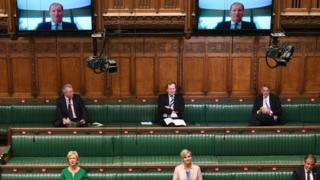 MPs will decide on a new system to allow them to vote in person on their return to Westminster next week, Jacob Rees-Mogg has said.

In a letter, the Commons leader told MPs the usual practice of voting in corridors would be replaced with a “more appropriate” method.

He has scrapped a temporary electronic voting system, as part of a push to resume physical working.

MPs will now return three hours early next Tuesday to agree an alternative.

He added that it will be up to the government to decide on an alternative to voting in the corridors – called division lobbies – where MPs’ votes are recorded.

MPs have been voting digitally as part of arrangements allowing them to work on a semi-virtual basis during the coronavirus pandemic.

The set-up has seen a maximum of 50 MPs allowed in the Commons chamber, with up to 120 taking part via video conferencing technology.

However the digital voting system is set to end after Mr Rees-Mogg outlined plans for MPs to come in after 2 June, following the Whitsun recess.

The plans have been met with dismay by opposition MPs, who have argued returning would be irresponsible and put them at risk.

Writing to MPs, he said the government would bring forward a motion allowing MPs a “chance to take a view on the new procedures for physical divisions”.

“The division lobbies will be replaced by a more appropriate alternative,” he added.

He also said work was underway with Commons authorities to determine how MPs shielding at home or with health conditions “can safely continue to contribute”.

Mr Rees-Mogg has previously said a plan for a “roll-call division” has been trialled, and “worked rather well” when tested in mid-May.

Writing to MPs, Sir Lindsay said “new advice” from Public Health England had made him update his view on division voting – after he previously set out a way it could be done back in March.

He said that despite plastic screens installed to protect those counting votes, “pinch points” in the lobbies meant it would be “difficult to maintain social distancing”.

Urging MPs from different parties to agree a solution, he said he would be setting up “temporary arrangements” for them to vote on a long-term solution.

“It is not good enough for the House to meet as planned on Tuesday 2 June and be unable to come to decisions on contested matters of any kind.”

Shadow Commons leader Valerie Vaz said Labour would work with the government to agree a new system to allow MPs to vote “on equal terms”.

But she criticised the government’s decision to scrap the temporary digital voting system, which she said had been done “without prior notice”.

She added that Mr Rees-Mogg had “bungled it and is now forcing Parliament to return early solely to correct his earlier discriminatory move.”

Coronavirus: How much will it cost the UK?

Image copyright Matthew Horwood Coronavirus has brought large parts of the economy to a standstill, and the government has had to spend billions to support workers, businesses and the NHS. So where is all the money going to come from? How much will coronavirus cost the UK? It’s still very early in the crisis, so […]

Image copyright Getty Images Newspaper reporting speculating how the prime minister might ease lockdown in England risks “sending mixed messaging” to people elsewhere in the UK, the Welsh Government has said. Boris Johnson is expected to make an announcement at the weekend. But in a statement the Welsh Government pressed that the decision in Wales […]

Image copyright Getty Images Business groups have called for clarity on what will need to change in the workplace as Boris Johnson unveils a “conditional plan” to reopen society. “Businesses need their practical questions answered so they can plan to restart, rebuild and renew,” said the British Chambers of Commerce. The prime minister said those […]