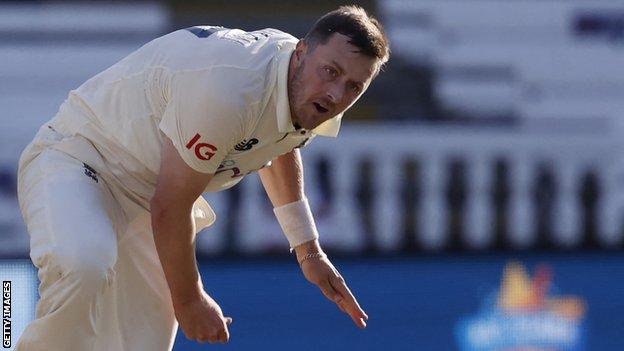 Robinson has been suspended by the ECB pending an investigation into historical racist and sexist tweets posted in 2012 and 2013.

The Prime Minister said he was “supportive” of Culture Secretary Oliver Dowden saying the ECB had “gone over the top” and should “think again”.

Asked on BBC Breakfast what he thought of the PM’s involvement, Ramprakash, who played 52 Tests for England between 1991 and 2002, said: “I think it is very unwelcome. He is trying to bear undue influence in this case.

“If I was Ollie Robinson I’m not sure I’d want Boris Johnson involved and trying to support me.”

Ramprakash, who was also England batting coach between 2014 and 2017, added the England dressing room would have been a “pretty toxic place” if Jofra Archer or Moeen Ali had been part of the same team as Robinson at Lord’s.

“I’ve heard people express sort of sympathy with Ollie Robinson, and say ‘hasn’t he shown a lot of character?’, but I haven’t heard enough about the victims or the people that these tweets are aimed at,” said Ramprakash.

“How do they feel? Where is the sympathy for those people? They are UK citizens, a lot of them.

“We live in a diverse society and we really don’t want this behaviour.”

Robinson, 27, posted the tweets when he was aged 18 and 19 and they came to light on Wednesday afternoon, while he was making his England debut in the drawn first Test against New Zealand at Lord’s.

After play, he apologised, saying he was “embarrassed” and “ashamed”.

The Sussex bowler was then suspended, and made unavailable for the second Test, which starts on Edgbaston on Thursday, when the game ended on Sunday night.

England bowler James Anderson said Robinson also apologised to his team-mates after the first Test and while there was “the initial shock at the language used”, he has “the full support the team”.

“The language and things talked about are obviously not acceptable,” Anderson said on Tuesday.

“He stood up in front of the group and apologised – you could see how sincere and upset he was.

“As a group we appreciate he’s a different person now. He’s done a lot of maturing and growing since then.”

The Culture Secretary tweeted his stance on Monday morning, with a spokesperson for the PM confirming his support for it later that day.

Speaking to BBC Radio 5 Live on Monday, former England captain David Gower agreed with Dowden, saying he did not think a suspension was the right way forward and the ECB should make Robinson “do the equivalent of community service”.

However, Michael Carberry, who played six Tests for England between 2010 and 2014, told 5 Live that Robinson “wouldn’t be playing Test cricket” if it was up to him, adding: “I don’t believe this is a problem where you can rehabilitate someone.”

The ECB is also investigating a report by Wisden that a second England player posted historical “offensive material”.

At a meeting on 21 January, the government’s scientific advisers, Sage, said: “No intervention, other than a complete, pre-emptive closure of borders, or the mandatory quarantine of all visitors upon arrival in designated facilities, irrespective of testing history, can get close to fully preventing the importation of cases or new variants.” Source link 60 SHARES […]

Image copyright PA Media Image caption Richard Leonard’s leadership has been criticised by some in the party since he took over from Kezia Dugdale three years ago Three Scottish Labour MSPs have called on the party’s leader, Richard Leonard, to quit ahead of next year’s Scottish Parliament election. James Kelly has resigned as the party’s […]