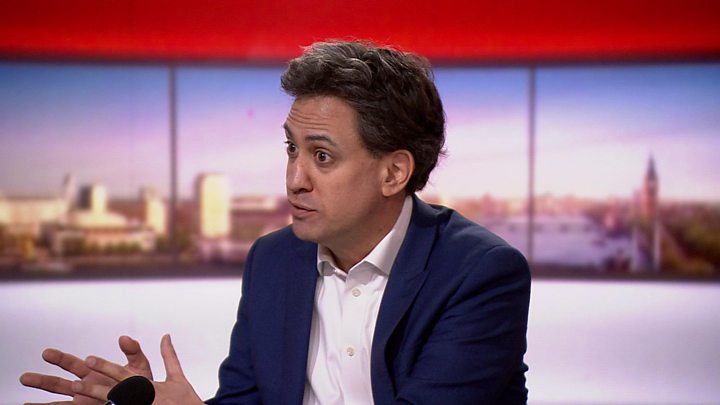 Labour left-wingers are not at risk of being “purged” for speaking out in defence of Rebecca Long-Bailey after she was sacked in an anti-Semitism row, former leader Ed Miliband has said.

Ms Long-Bailey made a “significant error of judgement” by sharing an article that contained an anti-Semitic conspiracy theory, he told the BBC.

But he insisted critics of Israeli policy still had a place in the party.

And he said allies of Ms Long-Bailey who have criticised her sacking – such as former shadow chancellor John McDonnell and ex-party chair Ian Lavery – would not be disciplined for doing so.

Sir Keir removed Ms Long-Bailey from her post as shadow education secretary after she re-tweeted an article by Maxine Peake, in which the actress and campaigner suggested US police forces learnt restraint techniques – including those which led to the death of George Floyd – “from seminars with Israeli secret services”.

Asked about the row on the BBC’s Andrew Marr Show, Mr Miliband said he did not believe Ms Long-Bailey was anti-Semitic but that she had made a mistake by appearing to endorse the comments.

“What this underlines is the fact that Keir recognises the gravity of the hurt that has been caused to the Jewish community over the last few years,” he added.

“Over the centuries when calamitous things have happened, Jews have been blamed and that is why there was an anti-Semitism issue in relation to this and that is why I believe Keir took the right decision.”

But he dismissed concerns expressed by some on the left of the party that this was a prelude to a further distancing from the Jeremy Corbyn-era and that legitimate criticism of Israel would be frowned upon.

At a meeting on Friday, Mr McDonnell and other MPs from the Socialist Campaign Group called for Ms Long-Bailey to be reinstated and sought reassurances that they would not be prevented from speaking out about human rights abuses in Israel and the “illegal annexation” of territory on the West Bank.

Mr Miliband said he had not shrunk from criticism of the actions of the Israeli government in the past and believed what was going on in the West Bank was “appalling”.

He said Ms Long-Bailey’s sacking was “absolutely not about whether you can criticise the state of Israel”, because doing so is “not anti-Semitism”.

But he said there was “a danger here that people try and make this into a wider issue” about the future direction of the Labour Party, following political divisions in recent years.

“I heard something… about how Keir wants to purge these people. He is not about purges. He wants to change the country by not having the Labour Party mired in issues which, frankly, provide a stain on us. Keir took very strong action [against Ms Long-Bailey] and now we need to move on and deal with the issues of anti-Semitism we face.”

I want to apologies unreservedly about the comments in the article that I wrote last week in Tribune regarding Trans rights in which I mention J.K. Rowling.

The MP, who backed Ms Long-Bailey in the leadership election earlier this year, said he accepted that Ms Rowling’s recent comments about how she had been a victim of domestic abuse in a past relationship were “heartfelt and must have been hard to say”.

“Whilst I may disagree with some of her analysis on trans rights, it was wrong of me to suggest that she used her own dreadful experience in anything other than good faith,” he added.

Labour said it would be making no further comment about the issue.

The Labour leader asked Boris Johnson to explain the “continued delay” in testing at care homes, quoting evidence from Care England’s chief executive to MPs on Tuesday. But the prime minister said Sir Keir Starmer was “in ignorance of the facts”, and there would be 200,000 daily tests in the UK by the end of […]

Image caption Sir Keir Starmer hailed “an incredible sense of solidarity” across the UK Labour leader Sir Keir Starmer has said different approaches across the four UK nations to tackling coronavirus are not going to “help us out of this crisis”. He blamed Prime Minister Boris Johnson for the way Wales and England had diverged […]

Media playback is unsupported on your device Media captionMarcus Rashford: “I’m grateful the prime minister changed his decision” Footballer Marcus Rashford says he wants to do more to help those in need after winning a battle to have a free school meal voucher scheme extended. His campaign prompted a government U-turn that will see about […]