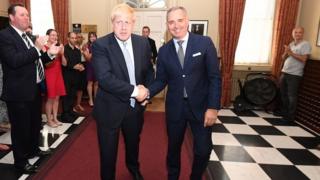 The UK’s top civil servant Sir Mark Sedwill has confirmed he plans to stand down from the role in September.

In a letter to Boris Johnson, he said it was the right time to go as the government moved to the next phase of its coronavirus recovery plan.

His other role as national security adviser will be taken by Mr Johnson’s chief Brexit adviser David Frost.

His exit follows reports of tensions between him and senior members of Boris Johnson’s team.

Dominic Cummings, regarded as the Prime Minister’s most influential political adviser, has long called for an overhaul of the civil service.

And in a speech on Saturday, Michael Gove, attacked what he called “group think” within its ranks.

A number of top civil servants have either left their posts or are set to depart in the coming months after the Conservatives’ resounding election victory in December.

Philip Rutnam is suing the Home Office for unfair dismissal after quitting in February while Simon McDonald is leaving the Foreign Office in September following its merger with the Department for International Development.

As cabinet secretary, Sir Mark advised the PM on implementing policy and the conduct of government.

A career diplomat, he served as Ambassador to Afghanistan during a 20-year career in the Foreign Office. He took over as cabinet secretary at short notice following Sir Jeremy Heywood’s death in November 2018.

He had previously worked alongside former PM Mrs May as the most senior civil servant in the Home Office.

After he leaves government service in September, Sir Mark will be made a peer while he will also chair a new panel on global economic security when the UK assumes the presidency of the G7 economic group of nations.

Sir Mark said he had served both Mr Johnson and his predecessor in “extraordinary times”.

“Two years ago, when my predecessor fell ill, your predecessor asked me to step in as Cabinet Secretary, and you asked me to continue to support you through Brexit and the election period,” he wrote.

“It was obviously right to stay on for the acute phase of the Covid-19 crisis. As you are setting out this week, the government’s focus is now shifting to domestic and global recovery and renewal.”

This departure will fuel speculation about Whitehall reform.

Senior members of Mr Johnson’s team have spoken about the need for civil service reform.

Dominic Cummings said earlier this year that there were profound problems in how decisions were made and criticised a lack of expertise in specific fields.

Last night, in a lecture, the cabinet office minister Michael Gove said if the government was to carry out the reforms it wants – it would need to reform itself too.

That reform may not be a step closer.

In response, Mr Johnson said Sir Mark made a “massive contribution” to public life over the past 30 years and had been a source of “shrewd advice”.

“You have done it all in Whitehall: from Afghanistan to the modernisation of the civil service; from immigration policy to Brexit and defeating coronavirus,” he said.

“After serving for decades with great distinction – and unflappable good humour – I believe you have earned the gratitude of the nation.”

Shadow justice secretary David Lammy has called for the government to act on a leaked report, on the increased risks of coronavirus impacting BAME communities. Mr Lammy told Andrew Marr that it was a “scandal” if members of the government say that Black lives matter, but then have “buried part of the review”. Public Health […]

Coronavirus: All primary pupils no longer going back to school

Image copyright PA Media Plans for all England’s primary children to return for a month before the summer break have been dropped by Education Secretary Gavin Williamson. Confirming the move, he told MPs he wanted all children back to school in September and that “exams will take place next year”. Labour’s Rebecca Long-Bailey expressed “dismay” […]

Image copyright AFP The health secretary says he “very much hopes” the 2m social distancing rule in England could be reduced to 1m this week with “mitigations”. Matt Hancock said measures could be put in place so people could be closer without a higher risk of transmission. Labour said it would support the change to […]